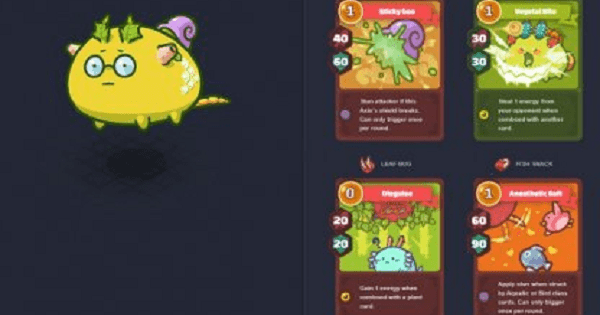 To be be able to maximize Sticky Tank's potential, we need to consider the best stats possible for this build. This build aims to withstand and disturb burst combos in the arena. Sticky Tank favors HP as its strongest attribute.

Sticky Tank build is the best counter for high burst damage combos in arena. Sticky Tanks are usually axies with high base health such as Plant, Reptile, and Dusk.

With the ability "Sticky Goo", this build will be able to stop a combo by just entering into a defensive stance. If ever your axie's armor shatters, the enemy will be stunned and the next attack will be a miss. This build is best paired with the Carrot Hammer card, which adds more armor if it breaks.

With Sticky Tank, the parts that are necessary for an axie to have are Snail Shell & Carrot. Snail Shell and Carrot activate the abilities; Sticky Goo and Carrot Hammer. Without these parts, Sticky Tank will not work.

This card can apply stun to damage dealing axies such as Aqua & Bird.

These moves can be a viable option for Sticky Tank. Since Sticky Tank likes to set up armor as much as possible, Drain Bite can be used to heal some of the HP it may lose. Third Glance can be used to sabotage your enemy's strategy by discarding a card from their sleeves.

Anesthetic Bait and Snail Shell are two of the most powerful defensive cards in the game. With this, you can stun an attacking Axie (Aquatic and Bird class for Anesthetic Bait) to immediately shut down their combo. On top of that, both cards provides decent a shield and attack value.

Sticky Goo will be able to stop a combo by just entering into a defensive stance and if ever your armor shatters, the enemy will be stunned and the next attack will be a miss. Carrot Hammer will then add more armor to Sticky Tank if its shield breaks.

Disguise with Vegetal Bite is one of the best round 1 combo you can do with your frontline. This will allow you to gain and steal energy to prepare for your damage cards next round.

Sticky Tank build is best paired with 2 damage dealing axies since it alone can withstand the damage your enemy makes by continuously setting up armor per round.

Just like Poison Tank, Sticky Tank is primarily weak against damage dealer axies. Damage Dealer axies can potentially one-shot combo this build especially with critical strikes if no armor is set up.