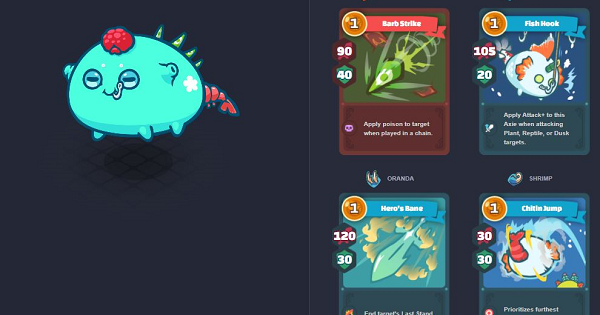 To be be able to maximize Shrimpinator Build's potential, we need to consider the best stats possible for this build. This build plays offensively by using shrimp to eliminate the backline and using garish worm to apply poison. Shrimpinator Build favors speed as its strongest attribute.

A good alternative for Hero's Bane since it also deals massive damage. Also, if this card kills the enemy, it will prevent them from entering last stand.

Crimson Water can also provide some decent damage and some shield. However, it will not give you an attack+ buff when attacking Plant, Reptile, and Dusk axies.

This is the main combo that you will be using when attacking Plant, Reptile, and Dusk axies to burst them down with the additional attack+ buff from Fish Hook.

This combo will allow you to burst down the enemy backline and apply poison debuffs if they are able to survive the combo.

The Shrimpinator Build should be paired with a tank and a damage dealer axie. Since this build will be focusing on bursting down the backline, you should have an axie that can deal with the enemy tank and an axie that can help you survive the first few rounds.

This build is weak against enemy axies with energy steal and energy destroy. Since you will need a lot of energy to perform combos to eliminate the backline, it is crucial that you have enough energy as soon as you have the cards you need for the combo.

Plant, Dusk, Reptile deal 15% more damage to Shrimpinator Build since it is an Aquatic axie.