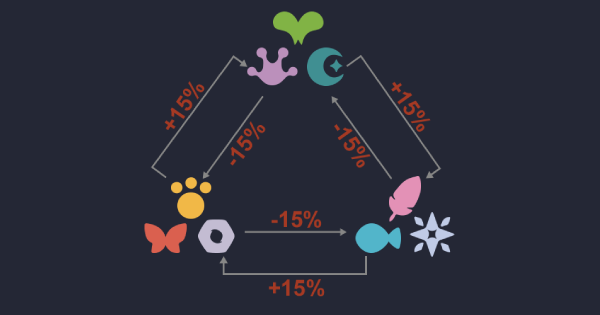 Each Axie Class has strengths and weaknesses which will affect the damage calculation of each attack. The damage of the card that you use will depend on the card's class and the target Axie's class.

During combat, Axies will always target the enemy infront unless they use a change target priority card. This makes the positioning extremely important to maximize your Axie's cards and stats.

What Are Combo Cards?

Some cards become extremely powerful when they synergize with another card. These cards are often used together as a combo to maximize their damage and efficiency.

Single Combat/Ronin guarantees a critical strike when used with 2 other cards. When paired with Ivory Stab/Imp, it becomes a guaranteed +1 energy card that deals massive damage.

This combo can deal up to 165 damage with each card when used in pairs against Plant, Reptile, and Dusk.

Using an Aquatic class against Plant, Reptile and Dusk can be difficult. However, this combo will let you deal some damage even with the class disadvantage. Use Risky Fish to get the Attack+ buff and then, use Hero's Bane for maximum damage.

This combo allows you to bypass the enemy's shield and use the "Increase Damage" effect of the Allergic Reaction.

Energy Steal cards allow you to steal your enemy's energy if they have one in their energy pool. If your opponent has 0 energy, you will not gain energy from stealing.

Try to count every turn how much energy your opponent has. This will increase the chances of stealing your opponent's energy especially if you are able to predict if they are going to use cards for the round.

Unlike Energy Steal, cards with energy gain guarantees that you will get +1 energy if you are able to meet the card's requirements.

Buffs and Debuffs are positive and negative status effects that can be inflicted on Axies. Each Buff and Debuff has their own unique effect that can change the outcome of the battle.