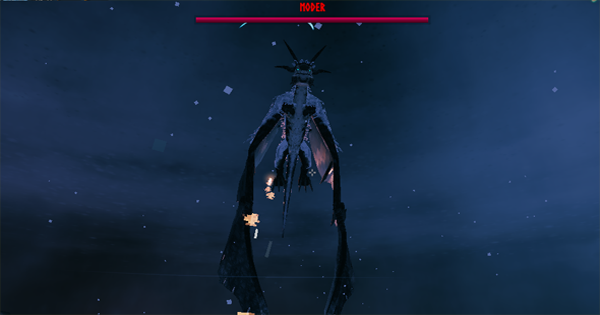 Moder is the 4th boss in Valheim. This guide includes how to summon, where to find the altar, Moder power, best armor, potions, food, runestone, weakness & more!!!

To pinpoint Moder's location, you need to locate its Vegvisir. It is usually located in derelict buildings within Mountain Biome.

Once you have interacted with the Vegvisir, Moder's location will now be located on the map.

The Runed platform is located in the Mountain Biome.

By placing 3 Dragon Egg on the Runed platform's sacrifice altar, you'll be able to summon Moder.

Where To Find Dragon Egg

Dragon Egg can be found in the Mountain Biome they are tucked inside a nest which are guarded by Drakes.

Preparing For The Moder Fight

Stock Up On Potions

This is going to be a tough fight since Moder will be flying during the battle & will only land, so we recommend that you bring potions like Medium Healing Mead & Medium Stamina Mead.

Make sure to bring a lot of Frost Resistance Mead since Moder can inflict Frost attacks which can lower your speed.

Since you're going to the mountains, we would advise that you equip the Wolf Armor Set since it can give you more armor & also you won't get any freezing effects.

We recommend that you bring the Draugr Fang for this fight since this is the strongest ranged attack weapon in the game and in addition it also has a poison effect damage to it that should inflict damages to Moder.

Since Moder is weak to fire, we recommend that you also Fire Arrows to put the dragon down & to top it off, bring some Poison Arrows in the fray, that way the poison will slowly deplete its health.

We recommend that you bring 100 Fire Arrows & 100 Poison Arrows for this fight.

Moder Has Resistance To Blunt Weapons

Moder has the resistance to blunt weapons so bringing one & attacking with it is not a good idea.

Before heading to battle as always, never leave with an empty stomach. So keep in mind as always that you should always leave with full health & stamina.

For the food, we recommend that you eat Cooked Serpent Meat, Serpent Stew & the Sausages as those 3 food can give you 221 Health & 165 stamina.

Frost Shards From Above

This is where Moder breathes frozen shards from above that can pierce through you.

Moder will charge up and let out a Frost breath that damages in a straight line so watch out for it at all cost.

This is one of Moder's melee attacks it has a huge reach, make sure to equip your shield if you are close to the dragon.

Another one of Moder's melee attacks, Moder usually bites if you are close to its head. It can also be blocked by a Shield as well.

Strategy Against Moder & Its Weakness

Moder will use shoot frozen shards every time he is flying, so make sure to dodge it all time.

Once the Frozen Shards has landed on the ground, it becomes spikes which can limit your movement, so make sure to break it with a sword.

Fire Is Its Weakness

Since Moder will mostly be flying during the battle, we recommend that you shoot it with Fire Arrows as this would give you an advantage and would kill the dragon quickly.

There are 2 Buffs that you can either be used in this fight. If you don't want to run out of stamina quickly during the fight then activate Eikthyr's buff or if you want to have physical resistance for 5 minutes then Bonemass' Buff is for you.

Once the Dragon has been defeated it will drop 2 Items.

To activate Moder's buff you have to go back to the spawing altar and place it on the rural stone with a carving of a dragon and you'll be able to received the buff "Always Tailwind When Sailing".

After You Defeated Moder

After the dragon's defeat, you can now go to the Plains Biome to face the final boss.