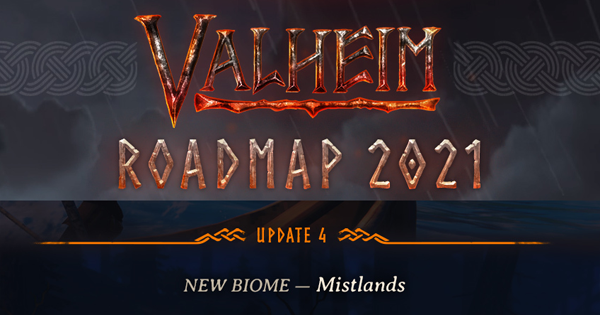 The Mistlands is the 2nd update that will be added to Valheim, as announced by the developers. Find out known info & speculation about the update here!!!

The Devs have announced that after the release of the Hearth & Home in Q3 2021 in the summer they will focus on The Mistlands update. For the moment, they have confirmed that they'll be putting aside the other updates for now.

The Mistlands is the 2nd update that has been confirmed by the devs. Though we've had no news about when the exact release date will be for the update, This will probably be released towards the end of 2021.

Valheim’s 2nd update: The Mistlands is a new biome that will be added sometime in the future. It would likely add more extra content.

As stated by Valheim it's likely that this 2nd update will give us a new biome although “new” in some sense and are technically available in the game right now.

Notably, players can already go to the area and see it for themselves, but there’s no content available there yet!

Valheim also stated on the update that a new boss will be added. Maybe we'll see not only a new boss & new enemies, but also mini-bosses as well?

A new biome almost certainly means a new boss, and given the sheer amount of webs visible in the Mistlands so far, perhaps one of the new enemies will be a Spider?