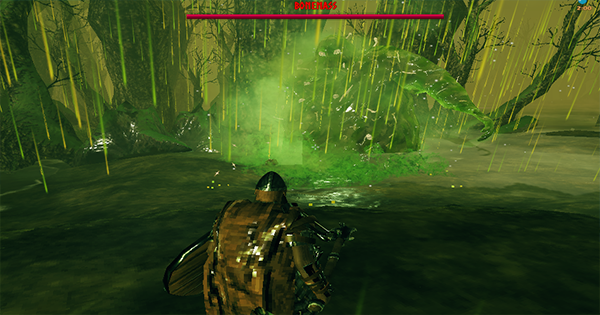 To locate the Vegvisir you must enter Crypts or wander around the Swamp Biome. Take note that these slabs appear randomly, so you might have to explore a couple of Swamps and Crypts to find one.

Also don't forget to bring the Swamp Key to unlock the crypts.

Once you locate the Vegvisir, Bonemass' location will appear on the map.

You must sacrifice 10 Withered Bones in order to challenge Bonemass.

How To Get Withered Bones

On the back of the Skull altar, a runestone will give you a hint: "Cook Their Remains". You'll find Withered Bones by exploring Sunken Crypts within the Swamp biomes.

Facing Bonemass is not an easy matter, as it is immune to any kind of pierce attacks. The Iron Mace is the perfect choice for this battle as Bonemass is weak against blunt weapons.

Heading on to the Swamp to face Bonemass also requires you to have strong armor - the Bronze Armor Set will no longer be enough. We highly recommend that you wear the Iron Armor Set to battle as it provides more protection.

Bonemass can also inflict you with poison throughout your fight, so make sure to bring a lot of Poison Resistance Mead to weaken the poison effect & also bring Medium Healing Mead to restore your health.

Build A Base Or Portal As Your Plan B

The fight with Bonemass can be tough, so make sure to create a portal that will teleport you back to your home or just simply retreat to a base you built nearby the swamp.

Same as before, don't forget to eat up. Always keep health at full & as well as your stamina.

In terms of food, we recommend that you feast on Cooked Meat, Cooked Fish & the Sausages as those 3 food can give you 165 Health & 145 stamina.

If you were able to purchase the Fishing Rod from Haldor The Merchant then you'll be able to catch some fish in a nearby river or streams.

This actually is mandatory before going to fight Bonemass since you might suffer from slow stamina regen due to all the water. So before you leave keep an eye out on your Comfort level & How many minutes you'll be rested.

This attack can be considered Bonemass's melee attack: it has huge reach so make sure to get your shield raised to block the attack.

It reaches out from its armpit that looks like a ball, dealing a lot of damage. Make sure to dodge it & and once the big slime ball is on the ground it turns to its minions.

This Poisonous Vomit can be deadly as it can cause a poisonous effect. Bonemass vomits, having the substance turn into a poisonous cloud. Make sure to keep your distance.

Strategy Against Bonemass & Its Weakness

Keep Your Eyes On Its Movements

Bonemass' attacks can be unpredictable at times so make sure to keep your eyes on it at all cost.

Watch Out For Its Minions

When it throws an armpit ball it turns it blobs that will aid Bonemass in your battle. Since the Iron Mace does a lot of damage, it's recommended that you take care of these fast so they won't be a bother over the rest of the fight.

The Hoe Is Your Best Friend

The flooded terrain can cause your character to move slowly, making you more vulnerable. Raise the terrain and keep yourself dry using the faithful Hoe.

Frost Weapons Are Also Its Weakness

Bonemass is not just weak to Blunt Weapons, but also Frost Weapons. We recommend that you bring 100 Frost Arrows or if you have already crafted the Frostner then it should act as a double damage of Blunt & Frost damage.

After defeating Bonemass, you'll be able to receive 2 items.

The Bonemass Trophy can be use to active Bonemass' buff, while the Wishbone can be used to detect hidden treasure while equipped & can also be useful for finding Silver Ore in the Mountain Biome.

After You Defeat Bonemass

The next boss will now be Moder, located in the mountains biome.