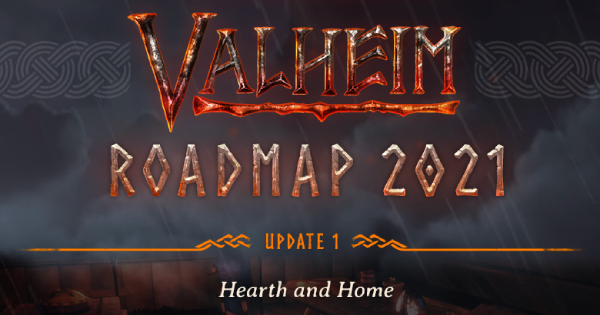 Hearth and Home is the first update for Valheim, as announced in the 2021 Roadmap. Find out the release date, info on update 1, speculation on Hearth & Home, when, and more!!!

The devs have released the trailer for Hearth & Home in a cinematic fashion, the trailer has also revealed the released date for the said update on September 16, this year!

The devs have confirmed to include the splits, food which categorizes for health & stamina. This means you choose two varieties of playstyle, if you like to deal damage then consume stamina foods but if your a defensive type then health food is for you.

They've also added that blocking power is now based on your maximum health and it also affects your stagger bar as well.

The devs have just announced another update on what will be in store for the Hearth & Home Update, it seems that a new item Coin stack & Coin pile will included as well a Treasure Chest for more storage, and also an Iron grate which you can lock up your treasures or creatures.

The devs have just announced that their first update: The Hearth & Home will be launching in Q3 2021, which be at some point in the summer. It's also mentioned that they won't be able to deliver all 4 updates this year and that the devs have also taken down their roadmap to make adjustments to it.

The devs of Valheim have provided again yet another update & this time they provided us with a picture of a horse. Perhaps we will get to build a stable or mount a horse? Let us know in the comments if you have any ideas!

Update From The Devs

The devs of Valheim have provided us an update - though there isn't much specific news of a release date. They're simply letting us know that their attention is now set on the upcoming update. They did, however, provide us with a cryptic screenshot of a crow perched on someone's hand. Whatever could this mean? Let us know in the comments if you have any ideas!

Iron Gate have released a roadmap detailing info on the next major update, though we've had no news about when the exact release date will be so far. Given that the team of developers has their hands full with patching up bugs, it's likely that this first update won't arrive for a month or so. We're hoping to see this at some point in early April, but no official announcement has been made.

The Hearth and Home Update

The devs have shared some upcoming update for the Hearth & Home which includes Darkwood roofs and window hatches for a new set of build pieces.

In addition the devs also implemented a new food system that places more importance between boosting health and stamina, making food choices more interesting based on your playstyle.

New Foods have also been added, more than 10 new recipes including Eyescream, Shocklate smoothie, various wolf meats, and so much more.

Check Out The Best Food In The Game Here

Lastly the devs have also revealed that a new seed might be added on the update, the Plantable onions with pretty onion flowers. Perhaps we will get more plantable seed when the update has been released.

What Do You Think?

We'd like to hear your thoughts as well - do you think we'll be getting new food as well in the first major update? Do you have other speculation of your own?

Don't hesitate to let us know in the ▼comments down below!

Nobody has posted here, because the article title is nothing more than click bait, and the article itself is useless, containing old, reposted info.