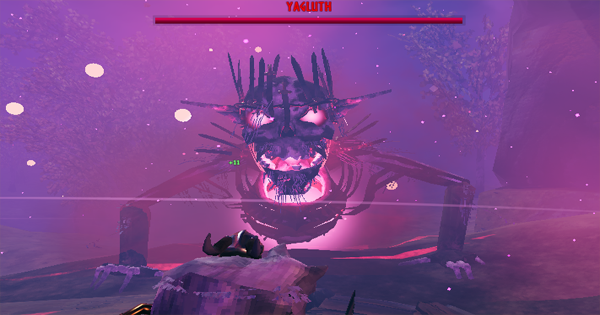 Yagluth's Vegvisir is typically found near Fuling Outposts or large stone monoliths within the Plains Biome .

Once you've interacted with Yagluth's Vegvisir, its location will be revealed on the map.

In the Plains biome you'll notice some stone fingers reaching out into the sky, that is where you'll find an altar & this is where you can summon Yagluth.

To summon Yagluth you must offer 5 Fuling Totems into the bowl & press E on the mystical altar to summon the monster.

Where To Obtain Fuling Totems

To obtain a Fuling Totem you must go to Fuling Camps or Fuling Outpost they are placed in an altar or dropped by Fuling Berserkers.

Preparing For The Yagluth Fight

Yagluth is not gonna be easy to fight. So bring lots of Medium Healing Mead & Medium Stamina Mead since you'll be running a lot & you might take a lot of hits as well.

Yagluth can breathe fire like a dragon, so when that move hits you, you need to consume Fire Resistance Barley Wine to reduce damage from the burn effects also bring lots of it just in case.

The Black Metal Sword is one of the most powerful weapon in-game & has very high slash damage, so we highly recommend that you craft this weapon to deal a lot of damage to Yagluth.

One of Yagluth's weakness is Frost, so make sure to bring 100 Frost Arrows to weaken it. & should be enough for this fight.

Nearby Base Or Portal Is Your Plan B

If all goes south you need to have another plan, either you can make a nearby base to retreat on or you can build a portal to teleport you back to your main base.

This is your final boss fight, eat up to get a full health bar & stamina bar and you'll survive this!

For the food, we recommend that you eat Cooked Serpent Meat, Lox Meat Pie & Blood Pudding as those 3 food can give you 245 Health & 170 stamina.

Yagluth can summon meteors from the sky, they do a lot of damage so make sure to find some cover.

Yagluth's mouth shoots a long-reaching straightforward flamethrower. To avoid this, you have to keep your distance or find some cover.

Yagluth raises his right hand up & forms an orb-like aura and smashes it to the ground that causes a blue explosion. You can block this by making sure that your shield is up.

Strategy Against Yagluth & Its Weakness

Watch Out For Other Enemies

During the fight with Yagluth, some enemies can wander inside the battle so make sure to deal with the first.

Giant Stones Are Good Cover For An Attack

Yagluth's attack the Meteor Shower & Fire Breath is the perfect example for this. So if Yagluth is planning to do one of these attacks, make sure to find a giant stone as cover.

When covering equip your Bow once it stop breathing fire & aim at the monster with Frost Arrows to weaken it.

We recommend that using Eikthyr's buff is applied here since you'll be using a lot of stamina during this fight. Since you'll be running quite a lot to avoid all of Yagluth's attack.

Frost Arrows Are Its Weakness

By bringing Frost Arrows you'll be able to weaken Yagluth. Since it breathes fire

Once Yagluth has been defeated it will drop 2 Items.

After You Defeated Yagluth

You can now explore Valheim and its mass open world, you can now do what you want. Have fun on your adventure!