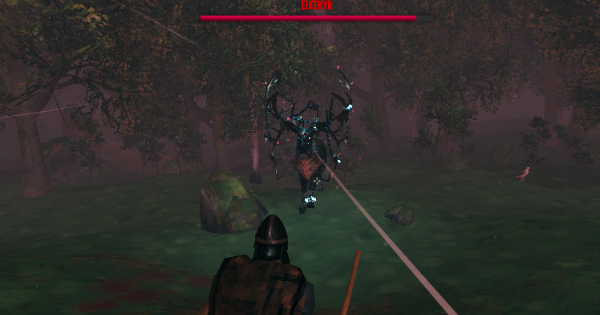 Valheim
Eikthyr - How To Summon & Power

Eikthyr is the 1st boss located in the Meadows in Valheim. The guide includes how to summon Eikthyr, Eikthyr power, best items & weapons, food, what to do after Eikthyr & more!!!

How To Locate & Summon The First Boss

Once you get closer, a message saying "Vegvisir Eikthyr" will appear, now press E key and Eikthyr's location will be revealed.

The Mystical Altar In The Meadows

When you've reached Eikthyr's location, you'll stumble upon an altar and that is where Hugin will explain the situation about "Calling Forth The Beast" & advising you to prepare for battle.

To Summon Eikthyr you must hunt its kin and by kin, you need hunt down a Deer and obtain 2 Deer Trophies from it.

Obtaining Deer Trophies & Placing It To The Altar

Once you've obtained 2 Deer Trophies then equip it on top of your item slot to place them on the altar.

Take note that you should prepare first, before fighting the beast Eikthyr.

Eikthyr can only be located in the Meadows as this biome serves to be his domain & also since he is the first boss you'll encounter.

Before heading to battle Eikthyr, you must equipped yourself with a better armor, since you've just started on your journey, the Leather Armor Set should do the trick.

Use A Shield & A Spear

We would recommend to use a Wood shield & a Flint Spear since his attacks can be blocked easily & you can attack Eikthyr from a safe distance with the Flint Spear and with this weapons equipped you'll be able to deal a lot of damage. 2 to 3 combos with the Spear while raising your shield.

Food Combination For The Battle

Before heading to battle a warrior such as yourself with a might thirst for battle needs to keep their energy up & must be full health on slaying the beast.

For the food combination, we would suggest Cooked Meat, Grilled Neck Tail & Mushroom as it should provide you at 103 Health Bar & more stamina.

Now that you prepared, it is time to face Eikthyr!

Eikthyr first lighting attack is where he shoots lightning at you from a distance.

For his second attack, its the Thunder Explosion which he stomps the ground and releases an explosive thunder that acts like a bomb explosion.

For the charge attack, Eikthyr usually runs from a distance and runs towards you with its antlers ready to pierce right through you.

For his melee attack, he just smacks you with an upward thrust.

Dodge & Attack From Behind

Use Shield & The Spear Against The Beast

All of Eikthyr’s attacks can be blocked easily with your shield, once you blocked his attack with the shield you can make a come back with a 1 to 2 hits with your spear. Keep doing this process and you'll kill the beast in no time.

Once Eikthyr has been killed, it would drop these items. Which can be used in the future.

After you have defeated the beast, you next journey should now be on the Black Forest. Best of luck adventurer!