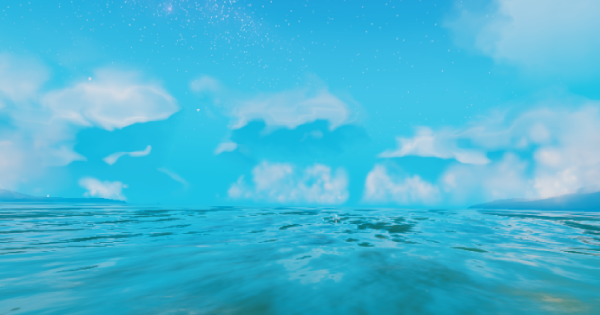 The Ocean is one of the biomes and locations in Valheim. Get to know its resources, a list of all enemies, sailing boats, resources, and more!!!

As the name suggest it, the Ocean is a large, empty body of water. It is accessible by boats, since swimming in it quickly depletes your stamina that would cause you to drown.

Build A Boat To Explore The Open Water & Go Fishing

The only way for you to get to places like the Swamp. Building a boat don't just give you the opportunity to explore but also to go fishing for Raw Fish meat with the use of a Fishing Rod

Chitin can be obtained by looking for a Leviathan. A Leviathan is an extremely large, ocean-dwelling creature that appears as an island.

Once you have located a Leviathan, look for an Abyssal barnacles and use a Pickaxe on it to scavenge some Chitin. But, you better hurry because the Leviathan will give a howling sound that will cause it to submerge if their Abyssal barnacles are mined.

Chitin can also be used as one of the materials to create the Abyssal Harpoon. Since it can be very useful to attack the Serpent lurking in the waters.

Serpents are snake-like creatures that lurks in the Ocean. Once killed they will drop Serpent Meat, Serpent Scale & Serpent Trophy.

Future Updates For The Ocean Biome

Valheim developers have mentioned on the Roadmap 2021 that The Ocean biome will be expanded in a future update. We can only assume that it would be the Ships and The Sea update.

The Raft is the first boat that can be crafted and it is one of the simple boats that you can craft and use in the Swamp area. But, it is not durable to a Serpent attack. So be cautious when using this on the open water.

The Karve is a boat and the successor to the Raft. It is faster and can be easily maneuvered than the raft, which allows for better sailing into the wind.

The Longship is the largest boat in-game and it is the successor to the Karve, this ship has 18 storage slots. Since the Longship is good for Cargo.