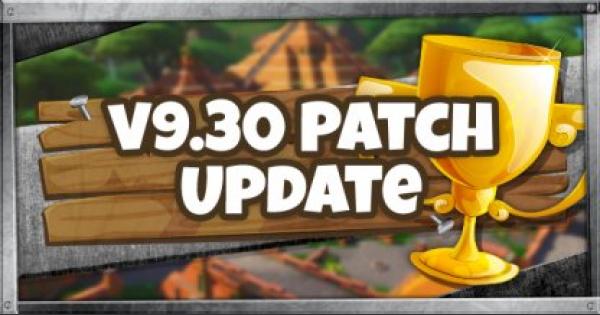 Find out everything to know about Fornite's v9.30 Patch Update, including patch notes, release date, official tweet, and more! It also marks the release of the new Chug Splash Healing item!

Drink Up in the v9.30 Patch Update

The first in a while, the v9.30 Patch Update will introduce a new healing item into the island! Various miscellaneous updates are also expected to come with the update.

Healing isn't just for you anymore! Share a can of Chug Splash with your friends and heal through the bullets for that Victory Royale!

Check Out the Chug Splash Here

Provides Healing to Those Caught in Blast

Be careful where you throw your Chug Splash because it can work against you. The Chug Splash can heal the user, their allies, and even enemies!

After player outcry, the Boom Bow has now been vaulted. The Dual Pistols and Dynamite will be joining it in the vault starting this update.

The Combat Shotgun's effectiveness at long-range has been lowered. It will now do 10% and 20% less damage in medium- and long-distance respectively.

Players won't be able to ride the projectiles of Proximity Grenades anymore. This was due to issues to level streaming caused by rocketing riding the grenade.

Check Out the Proximity Grenade Here