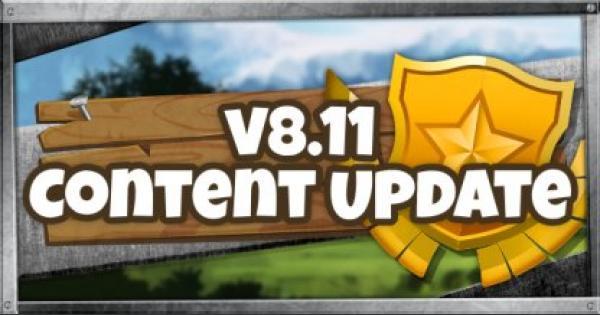 Learn everything new in Fortnite's v8.11 Content Update, including the release date, content details and the release of the new weapon - Flint-Knock Pistol!

Release of a New Weapon

A new weapon awaits in the v8.11 Content Update and it packs quite a punch! The update also contains various weapon changes and miscellaneous changes.

Shoot Down Enemies with the Flint-Knock Pistol

The Flint-Knock Pistol has an added bonus of damaging enemies while also knocking them back. Enemies are thrown back farther the closer they are to the shooter.

Does Not Work on Crouched Enemies

Crouching fully negates the knockback of the Flint-Knock Pistol. Enemies shot while they're crouching will still be damaged, but they won't be flung back.

The biggest drawback of the Flint-Knock Pistol is in its very slow reload and the need to reload after every shot. This can leave users vulnerable to enemy fire as they scramble to reload the weapon.

The Impulse Grenade Returns from the Vault

After its short stint in the vault, the Impulse Grenade is now back in the Battle Royale island with some significant stat changes. Its impulse strength against vehicles has been raised by 344%.

Check Out the Impulse Grenade Here

Scoped Assault Rifles will start to do more damage now as they receive a damage buff in this update. The base damage has been raised from 24/23 to 27/26.

You'll be seeing less Ballers now as the update lowers the Baller spawn rate. The spawn rate now stands at 50% instead the 100%.

The New Blackheart Cup tournament will have the best of Fortnite players fighting among each other to see who will come up on top! A $ 100,000 Cash Prize will be distributed among all server regions.