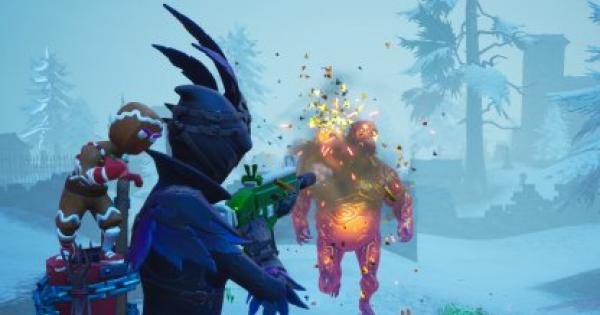 Check Out What the Ice Legion Is Here

How to Complete the Challenge

This challenge will task you to find and destroy 20 Golden Ice Brutes. These tough monsters and other legion members can only be found in Solo, Duo, and Squad modes for now.

Check Out the Game Modes Here

The Golden Ice Brute is the rarest of all the Ice Legion members. They mostly come up at mid- to late-game so don't expect to find one just as the match started.

The Golden Ice Brutes has an insane 2000 HP and has the highest damage out of all the Ice Legion members. Better be ready with weapons and ammo when taking them on.

Fighting them is worth it because they will always drop a legendary weapon along with a few other supplies! The type of legendary item is completely random and the supplies range from building materials to healing items.

Can Be Done Across Multiple Matches

This challenge is not single match-restricted and can be completed by players across different games. Challenge progress will not reset after every match.

Tips to Complete the Challenge

Since you can only find Golden Ice Brutes and the other monsters at Ice Shards, the first thing to do is find one. Aim for a secluded Ice Shard so you can farm in peace without any enemies trying to kill you.

With the Golden Ice Brute the rarest of all the Ice Legion monsters, it's best to just let the Ice Shard keep spawning monsters in the hopes that it will spawn one. Move on to the next Ice Shard once it self-destructs.

The Fiend Hunter Crossbow is the best weapon to use against the Golden Ice Brute as it can shred away its health with its added damage against Ice Legion monsters. It also has unlimited ammo!

Golden Ice Brutes will give you a bad time if you decide to fight it in close-combat. Move and stay away from their melee range at all times when fighting them.

Make the battle 1vs1 against the Golden Ice Brute so you can put all your focus on it. Shoot down the Ice Fiends and Ice Brutes to keep the playing field fair.