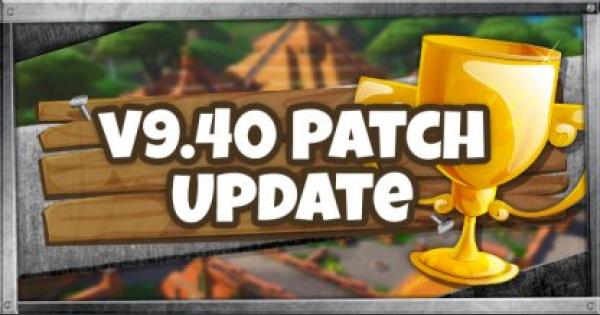 Find out everything to know about Fornite's v9.40 Patch Update, including Patch Notes, release date, official tweet, and more!!

Introducing a New Variant to a Classic Weapon

The first update after Epic Game's break, there's a lot to expect from the v9.40 Patch Update. There are returning weapons from the vault and the introduction of the new variants for the Tactical Shotgun!

Bring on more fire power with the new Legendary and Epic variants of the Tactical Shotgun. With a whooping 2.25 damage headshot multiplier and 83-87 damage per shot, it's a powerful weapon to hold.

Learn The Differences Of 4 Shotguns

With 4 types of shotguns by this updates, it's important to learn the strengths and weaknesses of each one. To be a king of close quarter combat, you'll need to know the differences between each of them!

After a brief time inside the vault, the Bolt Action Sniper Rifle makes its return to the island! Its Rare, Epic, and Legendary variants will now appear across the loot pool of all game modes.

In exchange for the Bolt-Action Sniper Rifle's return, the Suppressed Sniper Rifle has been vaulted. Both its Epic and Legendary variants have been removed.

The Combat Shotgun received another batch of stat changes in this update, this time regarding its range, damage fall off, and headshot multiplier.

The zoom for the Semi-Auto Sniper Rifle has been reduced. According to the patch notes, this was done as a Quality of Life change to improve the usability of the weapon.