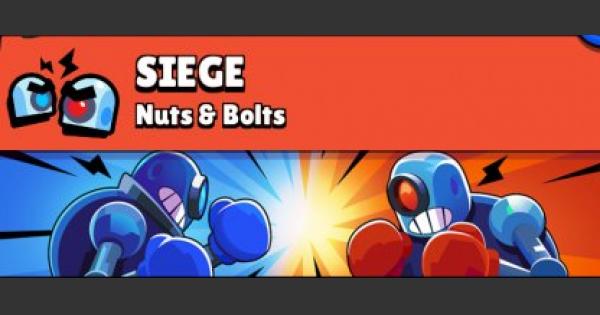 What Is Siege Mode?

Destroy The Enemy's Base While Defending Your Base

In Siege Mode, two teams of 3 will be fighting to destroy the opposing team's homebase, while at the same time defending their own base. The first team to destroy their enemy's base wins the game!

Base Is Equipped With A Turret

Each Homebase comes equipped with a turret that will allow it to defend itself from enemies. So you do not have to wholly focus on defending your base all the time.

Bolts will appear in the middle of the stage periodically. Collecting enough Bolts will eventually give you and your team enough parts to construct a Siege Robot that will help you, and your team push towards the enemy base!

A+ Tier Brawlers for Siege Mode

A Tier Brawlers for Siege Mode

B Tier Brawlers for Showdown Mode

Pam's Super is a big help to the team when fighting to take control of the Bolt spawn area. Her healing ability gives teammates the support needed to stay in the battle for longer. Her normal attacks also have a wide range to keep enemies at bay.

Check Out How to Play PAM Here

Jessie's attacks can bounce off of enemies and potentially deal damage to other nearby opponents. Her abilities allow her to manage crowds of enemies near each other in the middle area.

Check Out How To Play JESSIE Here

Gain Control Of The Middle Of The Map

Push Forward With The Robot

Getting inside the base's area will train the turret's aim at you. It is recommended to first construct a Siege Robot and let it push forward first. Its tanky HP will soak up the damage from the enemy's turret while you can focus fire on the base.

Use High Power Supers On The Base

If you have a Super attack ready when attacking the enemy base, then by all means, use it! High-power Supers, in conjunction with the Siege Robot's attacks will demolish any base's HP!

Bot Drop's middle area features little to no cover. Your best bet to reach and collect as many bolts as possible is to use the launch pads located on either side of the map. It is also recommended to traverse the map using the grass at the sides.

This map features tons of obstacles in the middle of the map. Try to use these obstacles as cover when you are fighting to take control of the middle area. You can also kite enemies here, and bottleneck them into a powerful super attack.

Nuts & Bolts has a few walls and grass in the middle. Best to use both of these obstacles to avoid damage from enemies vying for control in the middle of the map.

What about Junk Park

Mortis should definitely be on there. Top collector easy.
Gene should be higher imho. He can pull enemies in range of the tower or away from bolts, and pull the boss away from the tower, leaving nearby enemies vulnerable.

I can't believe Mortis is not on any tier. His dash is huge for collecting bolts