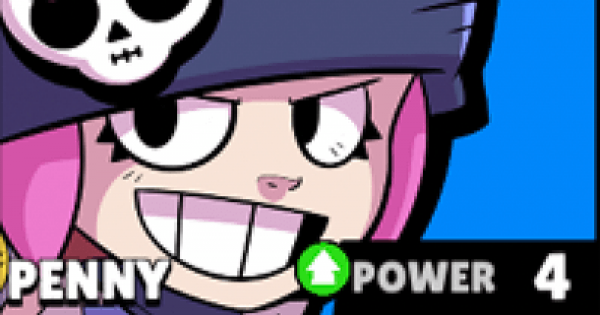 Learn the stats, play tips and damage values for PENNY from Brawl Stars! In this guide, we featured the basic strats and stats, featured Star Power and Super Attacks!

Penny shoots bags of coins, damaging the target and anyone standing behind. Her Super is a mortar-style cannon-turret!

How to Get PENNY

Penny shoots out a bag of heavy gold coins. This shot can pierce through enemies - a perfect way to hit multiple targets or foes clustered together.

Penny can spawn & plant a cannon from a certain range. It will shoot cannon balls towards enemies near its vicinity, dealing area damage. Place it in bushes or besides objectives to deal consistent damage.

When Penny's cannon is destroyed, it'll blast out the last of its cannon balls which can deal up to 1680 damage. Keep planting cannons when your Super activates to deal heavy damage to enemies.

Cannonballs from Penny's turret set the ground on fire for 3 seconds. Enemies in the burning area take 400 damage per second. A great addition to Penny's turret since her turret has such a long and wide range.

Place Penny's Cannon Next To Gem Mine

Place Penny's cannon right next to the gem mine to damage incoming enemy Brawlers and let you pick gems up in peace.

Attack First Enemy Before Enemies Behind Them

Penny's normal attack deals damage to enemies behind the Brawler it hits. So attack enemy Brawlers with others behind them to damage them as well.

When you can plant Penny's cannon, hide it in the bushes. Enemy Brawlers won't see it until it starts shooting at them so stay near it to tag team your foes.

Penny's attacks move in a straight line and can easily be dodged. Predict enemy movement and lead your aim so that most of your shots connect.

If you need to push and damage the enemy safe, save your Super and plant it right by the enemy safe. This will deal damage as long as it's still activated.

Penny's attacks reach mid-range and can serve a good line of defense in Heist. You can also plant her cannon by your safe to ward off enemy Brawlers.

When you're ready to plant Penny's cannon, place them in the bushes! They can go unnoticed or easily reveal hiding Brawlers, dealing damage to them, too!

Penny's normal attacks have the ability to pierce through her foes. It's best to aim towards targets clumped together to hit them with your shots at the same time.

Penny's normal attacks can be used to harass the enemy team. They pierce through players and can hit multiple targets at once, especially Brawlers clumped together behind each other.

You can plant Penny's cannon by the enemy goal to help defend you and your team when you make a play to score. This provides extra cover fire to prevent elimination when the ball is in your team's possesion.