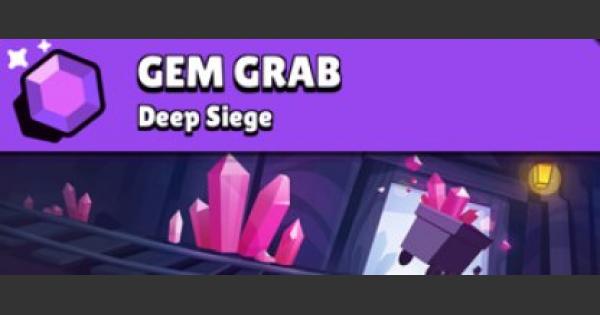 What is Gem Grab?

Gem Grab maps periodically spawn crystals at the center of the map. The main objective is to collect crystals / gems as a team, and hold at least 10 of these for 15 seconds to win.

Dying Spills Crystals On The Floor

The crystals you collect will stay with you until the game ends or you die. If you die, the crystals you have on you will fall to the floor, and anyone will be able to pick it up!

Currently, there is no time limit during the game. The countdown timer will be 15 seconds, and will only start once either team has at least 10 gems, or more.

Adjust Your Playstyle Accdg. To Situation

When the countdown timer starts, if you are winning, play it safe so that the enemy team will not be able to get your gems. If you are on the opposing side, it would be better to start getting aggressive, and force a turnover of gems!

B Tier Brawlers for Showdown Mode

Pam's normal attack has a wide area of effect, great for denying enemies with access to the Gem Mine. Place her Special, the healing turret, near the mine to continuously heal your team while taking control of the mine.

Check Out How to Play PAM Here

Gain Control Of Gem Mine Early

If you are able to gain control of the gem mine early, you'll be able to dictate the flow of the match. You can keep enemy Brawlers a distance away from the mine while being able to collect gems for your team.

Push Frontline to Dominate Mine

Controlling the mine is an advantage you need to aim for! Push your frontline to the edge of the mine to get control it, then start to defend through all the sides of the battlefield.

Group Up with Allies When Being Pursued

Use your numbers to your advantage when fighting enemies! When being pursued, head near your allies to receive backup. Zip through obstacles and grass when running to stay out of enemy fire.

When Winning, Retreat When Countdown Starts

When your team is winning, it's better to play on the safe side and keep near your team & side of the map. These will prevent you from getting eliminated and losing the gems you have in your hold.

When Losing, Attack Enemy With Most Gems

If you're on the losing side of the match, work with your team to take down the enemy Brawler who is holding the most gems. Eliminating them automatically resets the countdown, allowing you time to turn the match to your favor.

This map's central area is open and lacks any obstacles for you to use as cover. However, its sides are covered in bushes and walls which you can use to ambush unsuspecting enemies. Launch yourself to the enemy side using the jump pads.

With minimal obstacles and grassy areas, this map is perfect for long range brawlers. Use the open area to easily locate enemies and shoot from afar! Remember to lead your shots to hit moving targets.

There is quite an open space surrounding the gem spawn point. Your best bet is to weave in and out of the grass when collecting gems. This will make you an elusive target for enemies!

Deathcap Cave's gem spawn point is surrounded by an open area. Use a tanky Brawler like Bull or El Primo to be able to get to the center and collect gems! Long range Brawlers like Colt and Bo will be able to sniper enemies from far away!

This map features tons of grass and walls that you can use for hiding and cover respectively. To flush enemies out of their hiding places use Brawlers that do AoE damage like Brock or shred obstacles to pieces with Brawlers like Shelly!

The central area of this map is covered with grassy areas that form 2 swooshes. You can use these to sneak around the map and get to the enemy's side for some surprise ambushes!

This tight map has a ton of obstacles and grass littered around. Perfect for close to mid range brawlers since the map forces you to get up close and personal. Jump pads can also be used to instantly get across the map!

The Flooded Mine has lots of grass on the map. This will help speedy Brawlers weave in and out of grass to collect gems and avoid encounters! Brawlers that can deal AoE damage will be helpful in scouting for hiding enemies!

Four Squared is a symmetrical map which provides tons of cover and grassy areas for you. However, beware of the central area since there is a huge space where long range brawlers can pick you off!

Hard Rock Mine possesses an absurd amount of grass! Brawlers that can burst down enemies will be helpful in taking down hidden opponents! A Bo with Star Power will thrive in this map!

This map only has a few obstacles that you can use for cover. Minecarts will periodically appear on the map riding along the tracks. Stay away from these minecarts since they can both push you back and severely damage you!

This map's central area is very tight due to the concentration of obstacles and grass in the area. Close range Brawlers will shine in this map since the central area forces you to get into tight spaces to collect gems.

It will be difficult for long range Brawlers to shoot at enemies grabbing gems in this map since there are a lot of sturdy walls. It is best to stick with close range Brawlers and use the grass near the Gem spawn point to ambush enemies!

The Undermine features a lot of grass on its sides. It will be helpful to go into the grass to lose enemies chasing after you! You can also use close range Brawlers to make quick work of enemies that follow you into the grass!

Lol no one chats