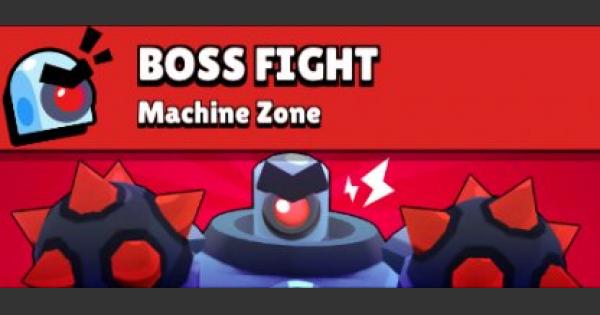 Tier list has been updated on July 1, 2019. Thank you so much for your feedback. We are happy to hear from you!

Pam can set down a healing turret with her Super. This will ensure longer survivability of her team! Her attacks also reach a wide area, allowing her to do sweeping damage on both the Boss Robot & robot mobs.

Check Out How To Play PAM Here!

Bull deals the most damage when at close range. His large health pool allows him to get up close and personal with robots, and make quick work of them. Just make sure to have some healing teammates nearby to keep you alive!

Check Out How To Play BULL Here!

What Is Boss Fight Mode?

Take Down The Boss Robot

In Boss Fight, the goal is to defeat the giant Boss Robot chasing you around the map. You need to work with 2 other Brawlers to defeat it!

Difficulty Goes Up Every Time You Beat Boss Robot

In Boss Fight, the difficulty of the Event goes up every time you defeat the Boss Robot. More robot mobs will spawn the more difficult the level and the Boss Robot does more damage.

Boss Fight is a Ticket Event that is unlockable from Trophy Road. It is only available during weekends and Event Tickets are needed to participate in them.

Check Out How To Get Event Tickets!

You need a total of 350 Trophies to unlock the Ticket Event option from Trophy Road.

Check Out How To Earn Trophies Here!

Fight Lasts As Long As Your Teammates Are Alive

There is no time limit for Boss Fight. The fight will keep on going as long as you or one of your team members is still alive and kicking.

Use Long-Range, Tanky Or Mobile Brawler To Do Damage

The Boss Robot shoots lasers & does melee attacks that deal heavy damage. Use long-range shooters like Colt or Ricochet, mobile Brawlers like Darryl to pop in & out of combat. Tanks that can soak up damage are also recommended. Be sure to use cover to kite the Boss around.

Support Brawlers such as Jessie, Penny or Healers such as Pam can also help your team survive longer. Jessie & Penny put down turrets that can do consistent damage & Pam can heal her team up when their health is low.

Run Away To Heal & Survive

It's best to run away and heal when you're low on HP. The respawn cooldown takes longer in this Event and the Boss Robot could already eliminate your teammates while you're respawning.

The respawn time in Boss Fight gets longer when the Event's difficulty gets higher, giving the Boss Robot & his mobs enough time to eliminate your team. Focus on surviving longer & staying alive to avoid this long cooldown.

Push Attacks On Boss When HP Is Full

It's best to push and attack the Boss Robot when your HP is full. This lets you play it safe, giving you a little leeway to take some damage either from the Boss Robot or his mobs.

Destroy Robot Mobs When They Appear

It's best to destroy the robot mobs as soon as they spawn. They can easily overpower and outnumber you and your teammates when left alone for too long.

Robot mobs with a different blue-r color will be more powerful and hit you with stronger attacks. Team up with your allies to take them down fast before they can hit you.

Stick To Your Teammates

Boss Fight is about teamwork. Stick with your teammates then work together to focus fire on the Boss Robot and lower its HP faster.

The Machine Zone has a wide space in the middle where you and the Boss Robot will start off. Kite the Boss around the walls & boxes to dodge its lasers while you or your other allies attack it from its sides or behind.

Another boss guide on this site which needs to be nuked - total Amateur Hour. Use Colt/Pam/Bull. Colt takes the power cubes, Pam heals and handles minions, Bull distracts/leads the boss. A real guide is at https://www.reddit.com/r/Brawlstars/comments/dxmv0k/the_slaughter_guide_for_boss_fight/

And what about Shelly ?

Carl was used to beat Insane 16 by the YouTubers, so please consider changing the tier list.

There is a map called Danger Zone not in this article.