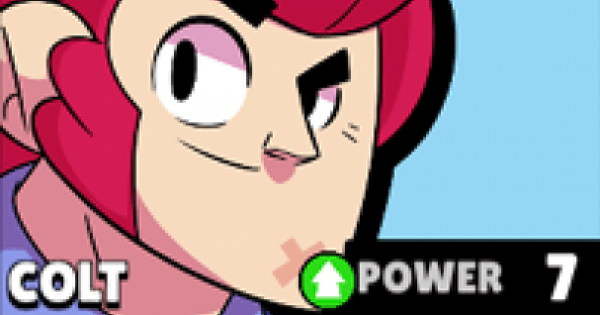 Learn the stats, play tips and damage values for COLT from Brawl Stars! In this guide, we featured the basic strats and stats, featured Star Power and Super Attacks!

Colt fires an accurate burst of bullets from his dual revolvers. His Super shreds cover and extends the bullet barrage!

How to Get COLT

Colt shoots six straight long-range shots out of his revolvers. Best used at enemies standing still, running away, or straight at you!

Colt rattles off a massive burst of bullets that shoot extra far and destroy cover. Remove hiding places for enemies, clear a path, or just burst down enemies. Colt's Super is versatile that can be used for different offensive situations!

Colt's movement speed is increased letting you move around the map faster, and get to objectives first and pick off more targets in a shorter amount of time!

Colt's shots do good damage in mid to long range. He is very effective in Gem Grab because he can easily shoot down enemies before they can come close to the gem mine.

Colt's shots are fired in a straight line, making them powerful if every shot connects. Surprise enemies by hiding in bushes, doing snipe shots to overpower them, and keep them away from the gem mine.

Colt Is Powerful In Ambushes

Colt has high DPS but his health bar is not the best. It's recommended to keep hidden to ambush enemies and not meet them head-on to deal the most damage.

Keep Colt a distance away from Brawlers with high HP such as Bull and El Primo. This way, he can whittle down their high health with his long-range attacks.

Use Super To Take Down Enemies Behind Cover

Colt's Super allows him to shoot high damage bullets in long range plus it also destroys walls & obstacles. Use his Super to burst down on an enemy Brawler hiding behind cover.

Colt's normal shots are already long-range. You can easily use him as a defensive Brawler, keeping enemies away with his warning shots.

Since Colt's Super is able to destroy cover, he can deal direct & huge amounts of damage to the enemy safe from a distance away.

Use Bushes To Sneak Closer To Enemy Safe

Wait until enemy Brawlers are pushing forward then sneak towards the enemy safe, they won't notice you hitting it because you're hidden and your attacks are long-range.

Colt's long range shots are very powerful in Bounty. He can easily finish off retreating enemies and damage incoming pusher from afar.

Stay Behind Brawlers With High HP

Colt can deal really good damage if you keep him alive. Stay behind ally Brawlers with higher HP - you'll be safe and you can still damage opponents with your long-range shots.

Colt does very good damage in long-range so he can easily harass the enemy team when they have control of the ball. Pick them off from a distance to give your team space to get to the ball.

The best use for Colt's Super in Brawl Ball is to shoot down the walls blocking the path to the goal. You'll create a straight path for your team's ball handler to score a goal!

Despite having a high damage and long range, Colt is a squishy Brawler. Make sure to keep a safe distance against the boss while focusing your fire on it.

Colt is a straightforward damage dealer that can hurt the big Brawler with his normal and Super attacks. His long range will keep him safe since he doesn't need to be close to be effective.

Colt should be S rank in boss fight