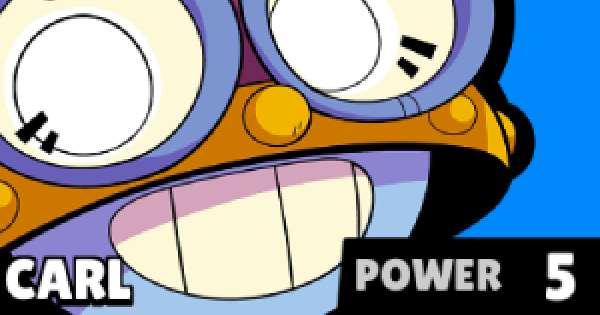 Learn the stats, play tips and damage values for CARL from Brawl Stars! In this guide, we featured the basic strats and stats, featured Star Power & Super Attacks!

Carl is a pickaxe-wielding geologist that comes from the Gem Mines. He throws his pickaxe like a boomerang, and his Super damages all enemies within his reach!

How to Get CARL

Unlock Brawler from Brawl Boxes or Purchase when offered.

Carl throws his pickaxe like a boomerang. It returns to him after reaching its max distance or hitting a wall. His pickaxe also pierces through enemies.

Carl increases his speed and starts to whirl his Pickaxe in a 360 degree radius, damaging everyone around him for 3 seconds. You can also pre-aim your normal attack while spinning.

Carl's Pickaxe flight speed is increased, allowing it to travel and return to him faster.

During Carl's Super, all damage he receives reduced by 30%. This will give him some much needed protection especially in this exposed state.

You will be able to deal tons of damage to enemies near walls due to the fact that your pickaxe returns to you after hitting a wall.

Use Super To Protect Mine Area

You can activate your Super when enemies get too close to the Gem Mine area. This lets you and your team control the most important area of the map.

Act As A Support Brawler

Carl is a great Brawler for Duo situations. He can help focus fire on enemies due to his Pickaxe's relatively long range.

Since Carl's pickaxe returns after hitting a wall, you can increase your damage output by firing at enemies in closed off spaces!

You can do a great amount of damage to enemies in narrow spaces. Since your Pickaxe passes through enemies, you have a chance to hit them multiple times.

Stay Away From Close Range Brawlers

It is best to stay away from Brawlers that thrive in close range. Your Super is not very effective when going up against a Bull or a Shelly.

Use Pickaxe To Disrupt Enemy Movement

Since Carl's attacks have great range and pass through enemies, you can throw it at groups of enemies to force them to move away from each other.

Super Can Push Away Enemies From Goal

Carl's super turns him into an obstacle that can damage enemies when they get too close. You can use this to pressure enemies to turn away from the goal when they're getting too close.