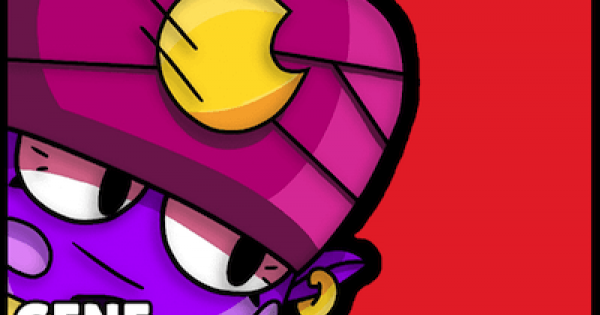 Learn the stats, play tips and damage values for GENE from Brawl Stars! In this guide, we featured the basic strats and stats, featured Star Power and Super Attacks!

Gene uses his magic lamp to shoot a splitting projectile. His super is a magical hand that grabs and pulls enemies close!

How to Get GENE

Gene shoots a solid ball of magical smoke from his lamp. If the ball doesn't hit a target, it splits up and spreads the damage in a cone.

Gene launches a magical hand from his lamp. If the hand hits an enemy, they get pulled back to Gene's location! This attack can pass through walls!

Gene heals all friendly Brawlers around him for 200 health per second.

Pat on the Back

Hitting teammates with Gene's Super now heals them for 2000 health.

Use Grass To Harass Enemies

Use the grass to stay hidden while you harass enemies. Since his attack spreads over a wide area, you will be able to charge up your Super to pull enemies to your team's side.

Pulling enemies is a great way to pick off opponents since you will be able to burst them down. Try to aim for non-tank enemies with a lot of Gems to instantly gain gems for your team.

Gene's skill set makes him an ideal Brawler to use in Duos. Having Gene as part of a team will help keep you sustained due to his Star Power, and dismantle enemy teams using his Super.

Gene's pull is very useful in late-game situations where enemies are hiding behind cover. Since his Super can pass through walls, you can snatch a non-tanky enemy from cover to eliminate.

Drag Enemies Away From The Safe

Gene's super can help him reposition enemies that are getting too close for comfort to the safe. You can buy your team precious time by pulling an enemy to a walled area right before they get too close to the safe!

Gene's regular attack can spread over a wide area after traveling a certain distance. You can use it to deter enemies from coming close when you and your team are rushing the safe, providing safe passage to the objective.

Play Defensively Until Your Super

Your Super will play a big part in securing the win for your team. Focus on hitting enemies to harass them. When your Super is ready, you can pull in a Brawler with lots of Stars.

Aim your Super at non-tanky enemies with lots of Stars. You and your team will be able to burst them down to secure a large amount of Stars.

Pull Enemies Away From Hurt Teammates

Gene is also useful for saving your hurt teammates from an enemy's final blow. Check your surroundings to see if there is a teammate that needs saving!

Your Super will be able to disrupt plays by pulling ballhandlers near you. When pulled, you can burst them down and steal the ball for your possession!

Pulling enemy tanks is not so useful since you won't be able to burst them down. They can also clear out your entire team, creating a path to the goal for the enemy. Focus on pulling non-tank enemies.

Gene's Super can save a teammate from Robots about to deal the final blow. Either pull the robot towards you to draw their aggro, or pull teammates to create some space against the robots.

Gene's Star Power is useful for sustaining the team in long fights. Having a constant heal will ensure that the team can survive for longer against extended waves of enemies.

Boss robots can be tough to bring down due to their huge health pool. For extended fights, Gene's Star Power can be useful for giving teammates constant health regeneration.

Not Meant As A Boss

Gene is mainly a Support Hero, meaning that his abilities and attacks are meant to support other teammates. He is not very effective to use as a big Brawler as a result.

You Can Pull Big Brawlers

Gene's Super is able to pull the big brawler to you and your team. Find the right moment when you can pull the big enemy to your team's side so that you can deal tons of damage to their HP.

Pull Enemies With Bolts To Team's Side

Since Bolts are a key element to winning this game mode, keep a close eye to the middle of the map, where bolts spawn. Aim your Super at non-tanky enemies that get too greedy, and punish them by bursting them down to get their bolts for your team.

this is ****. Gene cannot pull teamates. Who wrote this?!