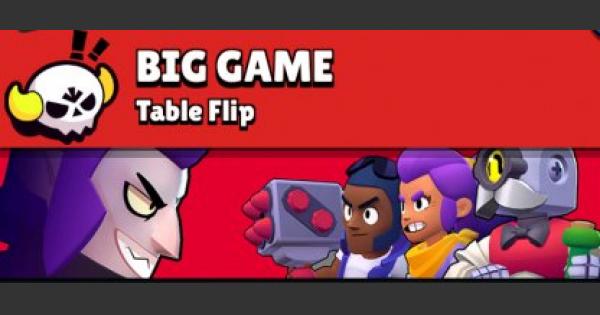 What Is Big Game Mode?

Fight As Boss or Fight Against Boss

Try To Stay Alive The Longest As The Boss

The goal of the Boss in Big Game is to try and survive the longest that you can while picking off the 5 Brawlers that are trying to get to you.

As Normal Brawlers, Take Down Boss As Fast As Possible

If you're part of the 5 Brawlers tasked to take down the Boss, your goal is to whittle down their health & take them out even before the match is over!

There is no guarantee if you will become the boss during a certain round. Therefore, try to choose Brawlers that you are comfortable using, or Brawlers that are good at being both roles.

Mostly Assigned To The Team

Most of the time, you will be assigned to the normal 5 team. This means that you should choose Brawlers that will do great in teams. However, you should also make sure that the Brawler you choose will not be weak when you become a boss.

Big Game is a Ticket Event that is unlockable from Trophy Road. It is only available during weekends and Event Tickets are needed to participate in them.

Check Out How To Get Event Tickets!

You need a total of 350 Trophies to unlock the Ticket Event option from Trophy Road.

Check Out How To Earn Trophies Here!

This Event's match length is only 2 minutes and 15 seconds. Bosses need to survive as long as they can while the 5 Brawlers need to deal as much damage or defeat the Boss within the time frame.

Play According To Your Role

How you play Big Game depends on which role you get. As the Boss, your objective is very different from the 5 normal Brawlers and vice-versa.

Carl - Can Damage Multiple Enemies At Once

Carl's normal attack will be able to pierce through multiple enemies. Your Super is also helpful if you get surrounded. Whirling around will deal massive damage to anyone near you!

Check Out How To Play CARL Here!

Bibi's Home Run Bar is very useful for when you are the Boss. An increase in movespeed will make you a harder target to pin down, while a fully-charged Home Run Bar attack can push back enemies that get too close!

Check Out How To Play BIBI Here!

Rosa's very large health pool will help her survive longer when going against multiple enemies. Her Super will also allow her to ignore a percentage of incoming damage making her more tanky!

Check Out How To Play ROSA Here!

Barley - Attack From Behind Obstacles

Since Barley can throw attacks over walls and obstacles, he can damage the Boss before it can even get close to hurt you and your team! However, be mindful that you will need to lead your attacks for them to hit the enemy!

Check Out How To Play BARLEY Here!

Dynamike is a thrower, which means that he can throw his bombs over obstacles. These attacks also deal a ton of damage over an area, meaning that you can burst down the enemy's health, and help whittle it down.

Check Out How To Play DYNAMIKE Here!

Gene - Pull The Boss To Your Team

Gene's Super will be able to pull the boss Brawler to your team's location. Wait for your team to get into position, then pull the boss to your location for the team to burst down!

Check Out How To Play GENE Here!

Pam's Super can heal her and her allies as long as they stay within its range. Make sure to put down your Super when your teammate's health bars get low to sustain them for a longer time during battle!

Check Out How To Play PAM Here!

Tips For Playing The Boss

Let The Brawlers Come To You

You have to keep yourself alive for as long as you can as the Boss in Big Game. You can elongate your life span by forcing Brawlers to come to you instead of moving forward and attacking them first.

Pick Brawlers Off One By One

Try to catch Brawlers individually instead of chasing after every one. You can focus fire to eliminate them, allowing you to survive longer as the walk back to the Boss end of the map takes very long.

Use Bushes To Hide & Ambush Enemies

Bushes will be very helpful for you as the boss. When in bushes, you will be able to hide from the enemy, and appear for a surprise attack against anyone unsuspecting enough to get close! Be careful as they may have backup nearby!

When being hunted down, make sure that you don't get yourself surrounded. You might get driven to a corner where the enemy can focus their fire on you easily. If you find yourself in a tight spot, play aggressively, and charge forward to clear a path!

Stay Away From The Enemy Spawn Point

It is best that you stay away from the enemy Spawn Point. They will have a fully reloaded weapon, and are invincible for a few seconds. Going here would be useless since your attacks won't matter, and you can get hit a lot of times!

Tips For Playing Against Boss

Draw Boss Out From Their Side Of Map

The goal is to damage the Boss and defeat it as fast as you can! AoE attacks will be very effective in making the Boss move away from their side of the map, moving it closer to you and your team!

Getting Back To The Boss After Death Takes Longer

Retreat and heal yourself rather than jump into the fray with low HP. Respawning & going back to the Boss's side of the map takes a long time, defeating the purpose of lowering the Boss's health as quick as you can.

Surround & Push The Boss To Corners

It would be best for the team to surround the boss in such a way, that the team will be able to drive the boss to a corner. This way, the boss has nowhere to run, and the team can focus their fire to bring the boss down!

It is important to have at least one Brawler on the team that can heal their allies. This lets the team take more damage from hits, and prolong them enough to whittle the boss' HP down to 0!

Stick With Your Team & Don't Rush In Alone

Teamwork is imperative in this game mode since the Boss has tons of HP! Make sure that you are sticking with your team so that the boss will not be able to target you, and instantly knock you down. There is strength in numbers!

Table Flip is a regular map mixed with walls, obstacles, and grass. As the Big Brawler, stick to your corner & pick off enemies one by one. If you're a normal Brawler, stay to the sides & bushes to avoid getting hit while dealing damage to the Big Brawler.

Hunting Party is with full of bushes. As a boss or 1 of 5 players, effectively using these bushes is the key to have better results.

where is Mortis?? people think he bad, but he is good. I have him

She is ok i guess
But Leon is really good

Where is Nita
Her bear and attack are powerful as boss