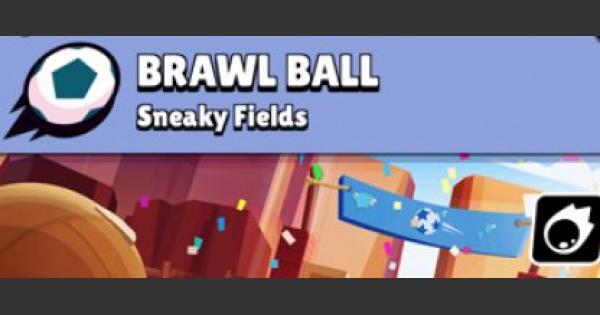 What is Brawl Ball?

This game mode is a straight up football game! Two teams of 3 will race to be the first to score 2 goals before the timer runs out!

You will be able to dribble the ball by walking over it. Using the "shoot" button will allow you to shoot or pass, and the super kicks the ball further!

You will have a time limit of 2 minutes and 30 seconds to score 2 goals! The first team to reach 2 will win the game!

Focus On Spreading The Floor

Have your team spread out against the map! They must be far enough to get the ball away from enemies pressuring you, but also close enough to pass to!

If the timer runs out and the score is tied, the game will go into overtime. Here, no barriers and grass are present, and the next goal wins. You will have 1 minute in OT.

Spike's Super can damage the enemy over time, forcing them to move around it instead of through it. This will be useful when you want to deny enemies a clear path to your team's ballhandler!

Check Out How To Play SPIKE Here!

Tara's Super is very useful since she can pull enemies together, allowing the team to focus their fire on the opposing team. Equipping any of Tara's Star Powers will also help finish off enemies, or help support the team.

Check Out How To Play TARA Here!

Use Tanky Brawlers To Carry The Ball

Tanky Brawlers like El Primo can be good goal scorers. They can withstand most attacks and survive long enough to get the ball to the goal.

Obstacle destroyers like Shelly, Colt, Bull, and Dynamike are effective in supporting the ball carrier, They can clear out paths with their Supers, making it easier for the ball carrier to score goals.

Knockback attacks from Shelly & Dynamike's Supers will make enemies lose control of the ball. Use these moves when enemies are near your goal to prevent them from scoring!

Use Your Supers Wisely

Supers will let you kick the ball further away! Save your supers for when you have a clear shot at the goal! This will let you score crucial goals from way downtown!

Provide Cover Fire at the Start of the Match

At the start of the match, you can predict enemy movement as they try to take the ball! Provide cover fire near the ball to deter enemies from taking it before your team could.

Backyard Bowl hasa lot of open spaces! You will need to pass the ball to teammates to get out of enemies cornering you. Remember that Brawl Ball is a team game, so don't be greedy and pass the ball!

Keep your eyes peeled on to the center of the map! The player who gets to the ball will go to the grass surrounding it. Make sure to surround it so that you got them trapped when they come out of hiding!

Sneaky Fields features a lot of grass at the center of the map. Use this to your advantage by maneuvering the ball to an area without enemies. When the coast is clear, you can dribble the ball, pass, or even shoot!

Super Stadium is a relatively open map. It has some obstacles like fences and barrels that can shield you from enemy fire. However, the recommended strategy here is to spread the team across the map in order to push the ball forward by passing!

Triple Dribble's layout may force you to attack the enemy's goal from the side since it has less obstacles, but you can also choose to play a passing game along the middle of the map until one of your teammates has a clear shot to the goal!

Mortis is good in brawl ball

Nothing is said about the map called "center stage "