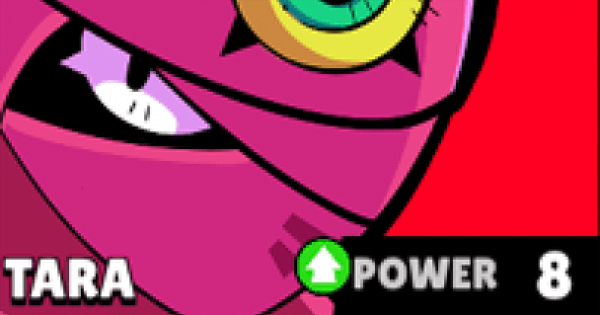 Learn the stats, play tips and damage values for TARA from Brawl Stars! In this guide, we featured the basic strats and stats, featured Star Power & Super Attacks!

Tara's triple tarot card attack pierces through enemies. Her Super is a black hole that sucks in all nearby enemies, causing damage!

How to Get TARA

Tara throws tarot cards towards her enemies. When they connect, they pierce through, hitting the foes behind them. Aim for foes clustered together or moving one after the other to hit multiple targets in one shot!

Tara can spawn a black hole that will draw enemies into its gravitational pull. Plant it in the middle of the battlefield & target multiple enemies so you can hit them all & finish them off!

When Tara opens her black hole, a doppelganger with 2400 health will appear and fight in the battlefield dealing 400 damage per attack! Keep hitting enemies to build up your Super & summon more doppelgangers to help you win!

Tara's Super cracks open a dimensional portal. A shadowy version of Tara appears to heal Tara and her teammates. This Star Power will also allow Tara to support her team in matches.

Use Super To Pull Enemies Loaded With Gems

Tara's Super is a black vortex with a gravitational pull so it's best to target enemy Brawlers carrying the most gems so you can have your teammates shoot them down.

Tara's attacks have a good range and move fast but they lack the fire power to burst down an enemy. Target enemy Brawlers with lower HP that you can consistently hit to eliminate them.

Not Effective In Single Face-Offs

Tara's skill set isn't meant for single showdowns. It's best to use her in Duo Showdown where she can use her Super to stun then draw in multiple Brawlers while her teammate deals damage to them.

Tara is best used as a supporting attacker in Heist. Her attacks pierce through enemies so target those clustered together to hit multiple targets.

Use Super To Anchor Enemies To One Spot

Tara's Super can draw in enemies and drag them into a focal point. It's best to do this to burst down on them and get a few seconds to push & damage the enemy safe.

When using Tara's Super, always target multiple Brawlers. This way you and your allies can focus fire in one spot, quickly shooting them down and earning more stars.

Tara is a good Brawler to use in Bounty. Her ranged attacks can whittle down enemy health plus her Super can draw in multiple enemies.

Since Tara's attacks can pierce through enemies, you can punish greedy opponents as soon as the match starts. Enemies may be chasing after the ball and you can easily take them out when they're clumped together in one spot.

You can use Tara's Super to drag enemies to a certain spot, stalling them from going near the ball or keeping them from attacking you when you're looking to score a goal.