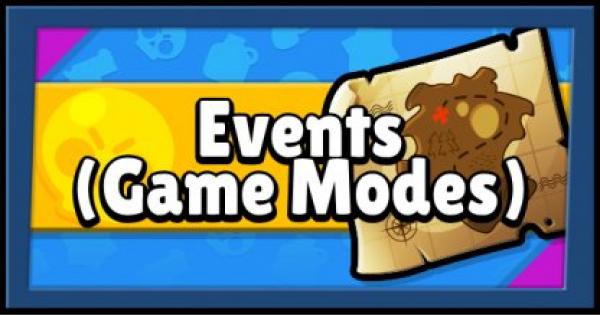 Learn more about the different Events or game modes available in Brawl Stars! Check this guide out for the list, tips and tricks on Showdown, Gem Grab, Bounty, Heist, Robo Rumble, Brawl Ball, and more.

Check Out How To Unlock Events!

Not All Game Modes Available At Start

Not all the game modes for Brawl Stars will be available for you to play after you first boot up the game. Some games modes will need you to meet requirements before they are unlocked.

How To Unlock Game Modes

Showdowns in Brawl Stars are free-for-all battle royale types of games where the objective is to be the last Brawler standing!

Teammate Can Revive You In Duo Mode

In Duo Showdown, if your teammate is still standing, they can revive you and continue the battle!

Countdown Starts When A Team Has 10 Or More Gems

Bounty is another 3 vs. 3 game mode where teams have to eliminate other players to earn Stars. Brawlers with a high kill count will be worth more stars and the team with the most stars will win!

Having a high number of stars will be the key to winning this game mode. You earn stars by killing enemies. If you have a higher amount of stars, get to safety as dying will make you lose all your earned stars!

A player will have a maximum of 7 stars on their person. Having a high amount of stars on you makes you a very valuable target. Make sure to play defensively when you have a lot of stars on you!

In Brawl Ball, teams of 3 will compete to score two goals. Players need to send the ball to the opposing team's side and shoot it into the goal, using their skills and supers to kick it around.

While playing this game mode, your Super will make you kick the ball further. Use it to strategically pass to far away teammates, or for a hail mary shot!

If the timer runs out without any team getting a higher score, then overtime will start. Overtime gets rid of any obstacles and grass, and the next goal wins!

Another 3 vs. 3 mode, Heist will give each team a safe to guard. Players need to protect their own safe while trying to destroy the opposing team's safe. The safe with the highest health will win the match!

The team with the less damaged safe when the timer expires will win the match. The time limit for the game mode is 2:30 seconds meaning you need to get to work on that safe pronto!

Robo Rumble will pit a team of 3 players against endless waves of robots. The objective is to keep their safe protected and undamaged.

Maximum Time To Defend Is 13 Minutes

You will have a maximum of 13 minutes to defend your safe from the AI-controlled robots. Work with your team to focus fire on robots to bring them down faster!

Defeat Boss Robot As Fast As You Can

You and your team will win the match as soon as you defeat the Boss Robot. You need to reduce his HP to 0 and avoid getting pulverized by his attacks.

Difficulty Levels Increase When You Win The Match

Every time you defeat the Boss Robot, the next time you play Boss Fight, the level of difficulty will go up. It starts at Normal, then goes to Hard, and so on.

Match Keeps Going As Long As 1 Teammate Is Alive

You'll only be defeated if all 3 team members are eliminated. Keep at least 1 ally alive to keep the match going and have more chances to defeat the Boss Robot!

As The Boss - Survive As Long As You Can

When you're assigned as the Big Brawler in Big Game, you need to keep alive as long as you can. Stick to your corner and use support Brawlers such as Nita, Jessie, or Penny to help you win the match!

As Normal Brawlers - Damage Boss As Much As You Can

As part of the 5 normal Brawlers in Big Game, you need to deal as much damage to the Big Brawler as you can. Try to draw the Big Brawler away from their corner by using throwers such as Barley or Dynamike.

Your team will be able to construct Siege Robots by collecting Bolts found on the middle of the map. Siege Robots will be helpful since they have a big HP pool, and deal massive damage.

What Are Events (Game Modes)?

Different Arenas To Brawl In

Brawl Stars offers a unique variety in gameplay with its 7 Events. There's one for every kind of player - for those who are competitive and others that are just looking to play the game.

Check Out How To Unlock Game Modes!

Test Of Competitive Skill In Showdown

Competitive players can exhaust their skills by playing the Showdown Events. Also available in Duo mode, you can invite a friend to help you battle it out in a free-for-all fight.

The other Events, though still competitive, have unique objectives to fulfill in order to win the match - making it a different experience each and every time.

Aint up-to-date. There are some modes missing as like Zone.

This website is really helpful, but I feel that Bull should replace Bibi in the showdown S tier