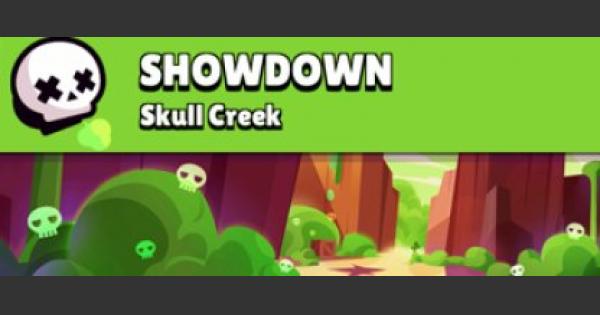 What Is Showdown Mode?

In Showdown Mode, the players' objective is to be the last Brawler standing! It's every Brawler for himself or herself - use the best of your skills to eliminate all your opponents and come out on top!

Available In Solo Or Duo Mode

You can choose to play Showdown by yourself or with a teammate! In Duo Showdown, your teammate can revive you, giving you another chance to achieve victory!

Brawl It Out With 10 Players Per Match

In Showdown, there's a total of 10 players, including yourself. This applies for both Duo and Solo modes.

In Showdown, the match lasts until there's one Brawler or team of Brawlers left standing! Depending on your chosen Brawler, go all-out on the offensive or stick to the bushes and work on some sneak attacks!

As the game progresses, a lethal damage zone will slowly creep in from the edge of the map; damaging anyone and anything within the vicinity. Try not to stay in a single spot too long when hiding from your rivals, you might soon find yourself trapped and left for dead!

Get Buffs With Power Up Items From Chests & Enemies

By killing a rival or smashing open treasure chests around the map, you will be able to obtain power-up items which boosts your attack & HP the more you collect. Beware of the number above the character's head, it represents how powerful they have become!

Darryl - Can Initiate Out Of Nowhere

Darryl is a highly agile Brawler due to his Super. He can ambush enemies out of nowhere by using his Super to quickly get to the enemy's location. Once he is close enough, he can then burst down enemies with his double shotguns!

Check Out How To Play DARRYL Here

Rosa - Walks It Off

Rosa's high health pool allows her to take a ton of damage in a fight! Getting up close and personal with enemies will also quickly charge up her Super, giving her a temporary shield that blocks a high percentage of damage!

Check Out How To Play ROSA Here

Bibi can use her Home Run Bar a number of ways. It can be used to pushback enemies chasing you, or chase down enemies that are trying to run away. Bibi's versatility makes her a great Brawler in Showdown.

Check Out How To Play BIBI Here

As an ambush character, hide in bushes and come out to take out enemies with his high-damage attacks! His Camouflage Super can help to scout out enemies for your team.

Check Out How To Play LEON Here

Darrryl's tankiness allows him to take a lot more damage especially in heated fights with enemies up close. If paired with a healer, it would take a lot for enemies to bring this Brawler down!

Check Out How To Play DARRYL Here

Rosa's large health pool and Super will allow her to take lots of damage before getting eliminated. If she activates her super, she will negate a huge percentage of the incoming damage.

Check Out How To Play ROSA Here

Pam is a very useful Brawler to have in Duo Showdown since her Super can heal the team, allowing them to survive for longer in battle!

Check Out How To Play PAM Here

Use Different Tactics For Each Brawler

It's best to know what each Brawler can do & the types of attacks they have. For example, long-range Brawler can counter short range rivals by kiting them and chipping them off before they get close. Close range Brawler can hide in bushes to launch a surprise burst of attack.

Destroy Boxes To Get Power-Ups Before Brawling

Before attempting to attack another Brawler, make sure that you're buffed up from the power-ups you can get by destroying boxes. These can be found around the map & increase your HP & attack damage. Having around 3 power ups early on will boost your survival in late battle!

Use Bushes To Ambush Enemies Or Heal

The many bushes found in the Showdown maps will help you last longer in the match. Use them to hide and ambush enemy Brawlers or lose them to quickly heal & fight another day.

Ambush Other Brawlers After A Fight

When you notice a Brawl happening near you, lay in wait and ambush the Brawler that comes out victorious. They'll have lower HP and you can easily take them down and grab their power ups.

Tips When Playing in Duos

Playing solo can easily get both of you killed. Work together by providing cover for each other, especially if one is being pursued by an enemy. Always be alert on what's happening to your team!

Don't give other teams the chance to revive their teammates. After you've dealt with one of the enemy pairs, make sure to pursue and defeat the remaining member before the other one respawns!

This map has a lot of open areas perfect for long range Brawlers to snipe other players. Despite this, remember that there are also walls that can give you cover if you find yourself low on health and ammo!

Dune Drift starts out with fairly few obstacles around the map. However, as the match progresses, it will feature more obstacles as all Brawlers start moving towards to the center. Best to use mid-range Brawlers to be as versatile as possible.

This map features a ton of obstacles littered around the map. It is a tight map which will force a lot of Brawlers into close quarter situations. However, Thrower Brawlers are also great in this map since they can throw over walls.

Eye Of The Storm

Eye Of The Storm Features & Tips

The eye of the storm is a kind of circular map that has its fair share of obstacles scattered around the map. It features both open and tight spaces. It is recommended to use midrange Brawlers to be versatile in several situations.

It would be best to move away from the patch of grass at the center of the map. Instead explore around the map and pick off enemies until the clouds force you to go to the middle. A Brawler that can burst down enemies can get the job done here.

This map allows you to be very mobile due to the amount of Jump Pads scattered around the map. You can use them to get close to enemies, escape enemies, or even escape the poison gas!

This map will feature only a few paths to get to the center. Using this, you can to a certain extent, where enemy Brawlers will be passing from. You can hide in the small patches of grass around the map and wait to ambush enemies.

There is only a small space on the center of the map due to the rivers coming from its sides. Close range Brawlers are great in this map since they can exploit the closed space the map forces them in during the later parts of the match.

Rockwall Brawl features a ton of walls that can block your and your enemy's line of sights. Brawlers that can shoot over walls are recommended to damage enemies trying to take cover!

Despite having some relatively open spaces on the outer areas of the map, it also features a small center where Showdowns are most likely to happen. Close to midrange Brawlers are great in the endgame for this map.

Scorched Stone will have both open spaces and tight areas which you will need to cover. It would be best to keep safe till later on in the game. Then use mid range Brawlers like Shelly to bring down opponents in the end game.

Skull Creek has lots of areas to hide and take cover from. Use Brawlers that can break barriers to expose hidden enemies!

There is a high concentration of obstacles in the center of the map. Despite being very open on the outer part of the map, it is recommended to choose a close range Brawler to clean up and finish the job in the late-game.

Thousand Lakes features tons of bodies of water along the map. Mid range Brawlers will be best suited to use in this map. To add to this, Brawlers that can traverse this like Bull and Darryl can get around in this map pretty well.

I don't like Bibi, to me she is really trash.