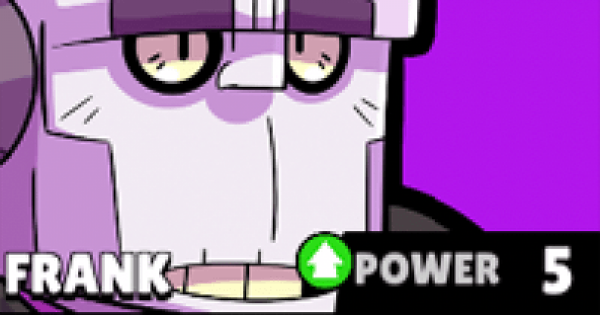 Learn the stats, play tips and damage values for FRANK from Brawl Stars! In this guide, we featured the basic strats and stats, featured Star Power & Super Attacks!

Frank swings his hammer at enemies, sending a shockwave. His Super is an especially powerful blow that stuns enemies!

How to Get FRANK

Frank slams his hammer into the ground, creating a strong shockwave that damages enemies. Frank's hammer takes time to hit the ground so predict enemy movement to ensure your attack connects.

Franks slams his hammer to create a massive shockwave with intense attack power that can stun enemies. This move has a delay and needs the right timing to be effective.

Defeating enemies power up Frank to strengthen his attack power by 50% for 12 seconds. Keep eliminating Brawlers for a virtually perpetual attack buff!

Frank gains +1000 health, making you a more effective tank for your team.

Use As Gem Carrier With High HP

Frank has a very long HP bar and can survive a lot of attacks from enemies. Use him as the main gem carrier in Gem Grab and he'll keep those gems within your team's hold.

Wait For Enemy To Be Distracted Before Attacking

Frank's attacks have a delay, making it easy for enemies to just side step away from his range. Make sure that enemies don't have track of where you are before attacking them.

Stun Enemies Around Gem Mine With Super

Frank's Super allows him to stun enemies when they're hit. Use this to your advantage and aim around the gem mine to stun enemy Brawlers, preventing them from picking up gems.

Due to the delay in Frank's attacks, it's best to lead your shockwaves & try to predict where your enemy will go. This way, your attacks will connect & damage your foes.

Wait To Finish Off Enemies

With his slow attack speed, use Frank to wait & finish off Brawlers in the middle of a fight. Hide behind bushes so that they have no idea where you are before you spring your attack!

Use Super To Clear Path To Safe

Frank's Super can clear down obstacles in the map. Use your Super when you're right by the enemy safe, clearing a path so that you and your allies can reach it & damage it faster.

Stun Enemies Then Finish Them Off

Frank's Super stuns enemies when they're hit. Use this when allies are near you so they can quickly jump in and shoot down your enemies, giving you space to push toward the enemy safe.

Use Frank As Safe Defender

Frank might be too slow for the fast-paced action of Heist. It's best to use him as a line of defense, keeping enemy Brawlers away from your team's safe.

Frank's Super is an effective way to blast down on multiple enemy Brawlers. If he hits more than one, his team can easily come in and burst them down before they can move again.

Hide Frank in the bushes & wait for enemies to get close to you to hit them. Your attacks are powerful enough to halve a Brawler's life and have enough range to make a follow-up fatal shot.

Frank's HP is insanely high and he can easily survive through most Brawlers' normal attacks long enough to carry the ball to the enemy goal.

Frank's Super can flatten the land. Use it to clear obstacles and walls blocking your path to the enemy goal.

Stun Enemies When They Have Ball Possession

You can also use Frank's Super to stun enemies if they're carrying the ball. This will knock the ball out of their control, allowing your team to take over ball possession.

As a big Brawler, Frank's Super can destroy walls, and knock down enemies inside its cone-like area of effect. This gives you enough time to burst down enemies to eliminate them!

frank is s in brawl ball

Frank should be A+ in robot rumble.