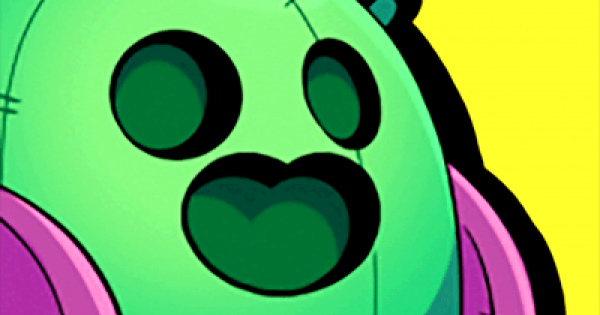 Learn the stats, play tips and damage values for SPIKE from Brawl Stars! In this guide, we featured the basic strats and stats, featured Star Power and Super Attacks!

Spike throws cactus grenades that send needles flying. His Super creates a field of spiky cacti that slows down and damages enemies!

How to Get SPIKE

Spike fires off a small cactus that explodes, shooting spikes in different directions.

Spike lobs a thorny grenade. Enemies caught in the blast area take damage and are slowed down.

After using Super, Spike regenerates 500 health per second by staying in its area of effect.

Spikes from cactus grenade fly in a curving motion, making it easier to hit targets.

Use Super To Control Mine Area

Spike's Super slows down enemies, and deals damage over time. You can use your Super to force enemies to enter an area where your team can focus fire into.

Spike's attack explodes into different directions after travelling a certain distance, dealing a small amount of damage to enemies it hits. You can use this to check in bushes, or even hit enemies hiding behind walls when aimed correctly.

Your normal attack can be used to find enemies hiding in bushes since it can explode in different directions. When an enemy is revealed, you can follow up with consecutive attacks, or relocate to a safer location and fight later.

Use Super To Cripple Enemies

Enemies caught in your Super take damage over time, and are slowed. This makes them an easy target for you to finish off. Save your Super, and aim to use it when you are the last 2 Brawlers.

Force Enemies Away From The Safe

Spike's super poses a big threat to enemies since it turns them into a big target for you and your team. Placing it close to the safe may make enemies choose another route, and buy you some time.

You Super can severely slow down enemies, and makes them easy targets for you and your team to focus fire. Aim to hit multiple enemies to rack up lots of stars.

Spike's normal attack can explode into different directions. You can use this to harass enemies hiding behind cover, and even finish off enemies with a low enough health!

Use Super To Force Enemy Movement

Spike's Super can bottleneck ballhandlers into areas where you can steal the ball, and enemies foolish enough to enter your super will be slowed and damaged.

Clear A Path To The Goal With Super

Since Spike's Super slows and damages enemies over time, you can drop one on a lane towards the goal. Enemies will stay away, giving you a clear path to the goal!

Great As A Big Brawler

Spike is an effective Big Brawler since he can check enemies in hiding using his normal attack. His Super can also slow down multiple enemies grouped together, which he can then finish with a couple of shots.

Aim to control the middle map area where the Bolts are located by placing your Super there. Enemies that are foolish enough to enter will be slowed, and can be easily shot down by your team.

Use Super With Siege Robot

When pushing with the Siege Robot, lay down your Super near the enemy base in order to discourage enemies from coming too close. You can then focus fire on the base without getting interrupted too much.