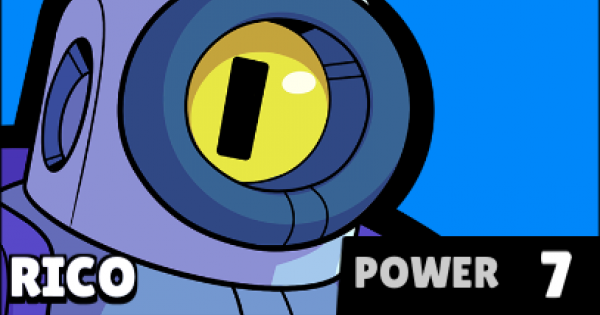 Learn the stats, play tips and damage values for RICO from Brawl Stars! In this guide, we featured the basic strats & stats, featured Star Power and Super Attacks!

Rico fires a burst of bullets that bounce off walls. His Super burst is a long barrage of bouncy bullets that pierce targets!

How to Get RICO

Rico fires a long burst of bullets that pierce through enemies and bounce off walls, gaining range.

Rico's bullets, from attack and Super alike, get supercharged by their first bounce and deal +100 damage! Make your first bounce count by aiming at enemies to deal extra damage to enemies!

When Rico falls below 40% health, he runs 34% faster. Best for escaping dangerous situations.

Stick To Bushes To Pick Off Enemies

Rico has very long range shots that deal moderate damage when they connect. It's best to keep hidden, sniping from bushes and supporting tankier or higher damage dealing allies.

Bounce Shots Against Walls Around Gem Mine

Try to aim so that your shots will hit walls and bounce off them. Since the gem mine area is a hot zone, it's more likely you'll hit a couple of enemy Brawlers with your shots.

Rico's shots do decent damage and they have very long range, allowing him to hit targets without getting too near them.

When you activate your Super, aim at walls and obstacles to bounce them off, making it hard for enemy Brawlers to predict and dodge them.

Use Range To Attack Safe

When your teammates have cleared the path to the safe, you can use Rico's long-range shots to damage the safe from afar.

Keep Rico to the side of the map or hidden in bushes - he is better off sniping enemies than facing them head on in this Event.

Rico can sweep bushes by bouncing his shots off walls and obstacles. Be sure to do this to expose any Brawlers waiting to make an ambush.

Hide Then Snipe From Bushes

Rico excels in the Bounty Event if you know how to use him properly. Keep hidden and snipe at enemies. Use the walls around them to ricochet your shots & to make them hard to dodge.

Rico isn't the best to use in Brawl Ball. So it's better to utilize his shots to defend teammates or your ball carrier, clearing a path & eliminating enemies so you can score.

Chip away at the boss' health by shooting at walls to make the bullets bounce into the boss robot. Reposition to another safe location when the boss starts to get close, and continue shooting from there.

Hit The Big Brawler From Behind Walls

You can angle your shots to make your bouncing bullets hit big Brawlers while you are hiding safely behind walls. The big Brawler may need to actively hunt you down to stop getting harassed.

You can fire your normal attack at the middle map area in maps that feature tons of obstacles. The chaotic bouncing of the bullets may hit enemies.