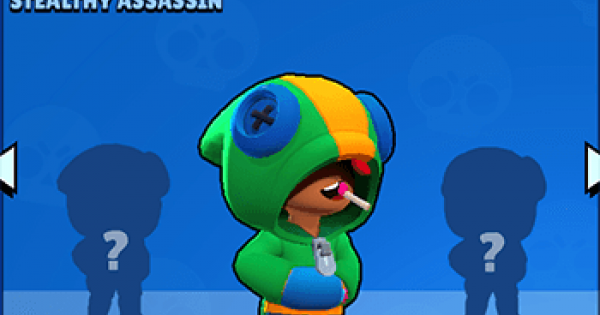 Learn the stats, play tips and damage values for LEON from Brawl Stars! In this guide, we featured the basic strats and stats, featured Star Power and Super Attacks!

Leon shoots a quick salvo of blades at his target. His Super trick is a smoke bomb that makes him invisible for a little while!

How to Get LEON

Leon sends out four spinner blades that lessens in longer-range. Get close to your foes to easily eliminate them fast!

Leon turns invisible for a period of 7 seconds. He loses this invisibility when he attacks or gets hit by opponent shots. Avoid getting spotted & move behind enemies to instantly shoot them down.

Leon gains a movement boost when he uses his Super. This is especially useful when chasing down an enemy or running away when low in HP.

Leon recovers 600 health per second while his Super is active. This Star Power will increase Leon's survivability. If he is in a tight spot, you can activate your Super and get out of there.

Harass Enemy Team By Ambushing Them

Leon can easily pick off enemies in a map full of bushes. Keep hidden and attack only when you're super close to your enemies to bring their HP down fast and eliminate them.

Can Be Effective Gem Defender

Leon's innate movement speed allows him to be a useful gem carrier. He can swoop in, pick up gems, and make a hasty retreat. His invisibility is also extremely useful when the countdown begins, making it difficult for enemies to spot you and take gems from you.

Most Effective For Ambushes

Leon should not be used as an aggressive attacker in Showdown. His specialty lies in ambushes as his attacks are extremely powerful in close-range. Keep to the bushes & wait for enemies to draw near you before unleashing attacks on them.

Leon's spinning blades deal more damage when you're up close & personal with your target. Aim to get as close as possible to inflict as much damage & eliminate your opponents.

Use Super Then Run To Enemy Safe

Build up your Super then run to the enemy safe! You can deal really good damage to it while the enemy team is occupied elsewhere!

Ambush Enemies To Push Towards Safe

Use Leon to ambush the enemy team! He can pick them off one by one, allowing your team to move up the map towards the enemy safe.

Use Super Then Attack Enemies From Behind

Leon is a very sneaky but effective attacker. Use his Super to keep away from enemy sight, move behind them, and then attack them to easily get Bounty stars.

With his fast movement speed, Leon can chase down retreating enemies and finish them off with his ranged attacks.

Leon can be an extremely effective ball carrier if he has his Star Power. He can activate his Super, get a boost in movement speed, and basically outrun everyone, allowing him to quickly score on the enemy goal!

Leon has powerful attacks that can easily destroy opponents in close-range. Use him to defend your ball carrier and harass the opponent team to keep them off your team's backs.