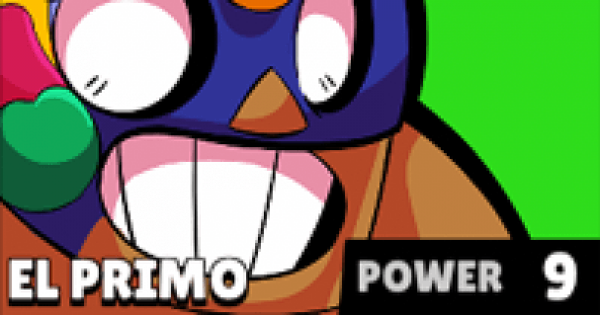 Learn the stats, play tips and damage values for EL PRIMO from Brawl Stars! In this guide, we featured the basic strats and stats, featured Star Power and Super Attacks!

El Primo throws a flurry of punches at his enemies. His Super is a leaping elbow drop that deals damage to all caught underneath!

How to Get EL PRIMO

El Primo delivers four strong punches in close-range. They're very effective in bringing down enemy Brawlers with lower HP but it can be hard to hit long-range Brawlers.

El Primo does a ranged jump and elbow drop on a targeted area. He can instantly destroy enemy Brawlers clumped together or make a quick escape from danger.

When El Primo's Super hits an enemy, they will be set on fire for 4 seconds. This deals up to 800 damage! Target multiple enemies clumped together to maximixe damage!

El Primo gains 32% speed boost for 5.0 seconds after using Super. This allows you to get in and out of dangerous areas quickly and easily.

El Primo is pretty tanky with his high amount of HP. He can also deal decent damage to enemies close to him. Keep mobile so long-range attacks won't reach you and you can keep your gems safe.

You can use El Primo to defend the front lines & take control of the gem mine early. His HP allows him to withstand attacks and he can quickly retreat with his Super if his health goes down too low.

Use Super To Burst Down Enemy With Most Gems

You can use El Primo's Super to chase after and burst down on an enemy Brawler who is holding the most gems. You can easily turn the ties of the match, resetting the countdown & gaining more gems for your team.

El Primo will excel in 1 on 1 Brawls in Showdown. He can focus fire and get close, lasting against strong hits with his high HP. His punches can also deal good damage, taking down most Brawlers with just a few hits.

Hide & Wait For Enemies To Come To You

Hide in the bushes and wait for enemies to come to your spot. You can easily overpower them with a couple of hits and use your Super to chase after them when they retreat!

Getting several power-ups can make El Primo quite difficult to topple in Showdown. His HP buffs up nicely, making it hard to bring him down in the later game.

Use Super To Elbow Drop Into Enemy Safe

Build up your Super and then use it when you're near the enemy safe. This launches you right into it and you can go ham on your attacks, dealing good damage to it while enemy Brawlers are scrambling to stop you.

El Primo can easily overpower unsuspecting Brawlers. Hide in the bushes found in the map and wait for enemy Brawlers to go near you, use your punches to lower their health then activate your Super to finish them off.

Try To Catch Enemy Brawlers On Their Own

El Primo is more effective in one on one Brawls than team fights. It's best to roam on your own and find enemy Brawlers separated from their team to quickly finish them off.

Use El Primo To Chase Down Brawler With Most Stars

Use El Primo's Super to target and chase down the enemy Brawler with the most Stars. After hitting them with your Super, use his punches to defeat them & gain their stars!

Use El Primo To Carry The Ball

Using El Primo as the main ball carrier is quite effective in this mode. He has enough HP to survive enemy Brawler attacks, allowing him to shoot & score.

If El Primo isn't the ball carrier, he can be used as a tank to stick to the Brawler with the ball. He can use his punches to damage Brawlers who get too close to the ball plus use his Super to chase them down & finish them off.

El Primo's tankiness will make him a great Big Brawler since he can soak up tons of damage. His Super also lets him jump to enemy locations, and lay waste to those unlucky enough to be there!

EL primo should be B rank in gem grab not F.