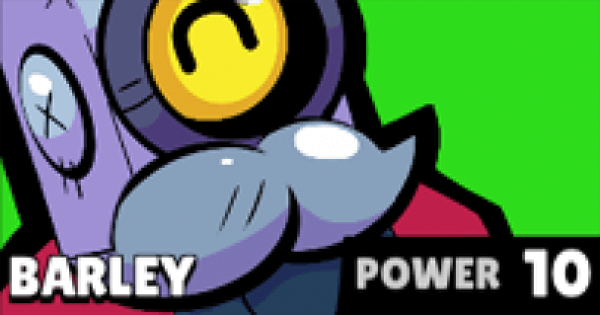 Learn the stats, play tips and damage values for BARLEY from Brawl Stars! In this guide, we featured the basic strats and stats, featured Star Power & Super Attacks!

Barley attacks by lobbing bottles at enemies, doing splash damage. His Super is a huge barrage of burning bottles!

How to Get BARLEY

Barley lobs a bottle, breaking it on the ground. Enemies take damage from the splash, and more damage over time if they stay in the puddle. This move can be used to tactically corner an enemy or defend a point on the map.

Barley hurls a flurry of fiery bottles, covering a huge area in flames. Deny enemies passage using this attack and deal massive damage to those unlucky enough to be caught in the flames! Damage from different bottles from the Super do not stack.

Barley regains 300 health from each main attack. A useful Star Power to have, you can easily regain health by throwing bottles when in a pinch. You don't even need to be targeting anyone!

Adds +140 damage per second to Barley's attack. Barley will be more effective in controlling areas in different game modes, and an overall more deadly Brawler!

Barley has the capability to control the direction of where enemy Brawlers can go by lobbing his AoE attacks towards them. He can corner them, rendering them unable to go near the gem mine.

AoE Attacks Can Be Used To Harass Enemy Front Line

With Barley's attacks dealing area-of-effect damage, he can harass & push the enemy front line backward. This will allow his team to take control of the gem mine and win the match!

Barley is not that effective in Showdown. He lacks the attack power to burst down on enemy Brawlers, unless he uses his Super. Players need the right timing & skill to make him useful.

Barley is able to lob his bottles over walls and obstacles so it's best to stick to them to do damage while avoiding getting hit directly by enemy shots.

Corner Enemy Brawlers To Eliminate Them

In Showdown, try to corner enemy Brawlers. They won't have the space to move and Barley's attacks will be able to damage them over time.

Barley can be quite effective in Heist Mode. He is able to throw his attacks over walls & obstacles, allowing him to damage the enemy safe while being a short distance away from enemy Brawlers.

Use Super Near Enemy Safe

Barley throws a flurry of molotov bottles when he uses his Super, creating massive amounts of damage so use it when you're near the enemy safe!

Use AoE Attacks To Defend Your Safe

Barley is also effective in a defensive role in Heist. He can keep enemies away by throwing his attacks around his team's safe, creating space that won't allow them to damage it.

Barley isn't the best in attacking in the front lines. It's recommended to stay behind a bulkier Brawler and do follow up, collaborative damage with his AoE attacks.

Barley can pick off escaping enemies by lobbing his attacks towards their direction. He can control which direction they'll go and if their health is too low, he can easily eliminate them with a few well-placed throws.

Create A Path Via Area Of Denial

Barley can be both aggressive & defensive player in Brawl Ball. He can easily keep enemies away from the Ball via his AoE attacks or also create a clear path for allies to shoot the ball towards the goal.

Use Super To Deal Massive Damage

Barley will be able to deny enemies the middle area of the map using his attacks. Since his attacks affect an area, he can push back enemies from the bolt spawn area.

Protect The Middle Area Behind Walls

Barley is able to safely throw his bottles while behind walls. This will minimize the risk of getting badly damaged when fighting for area control.

NeW cuStOMerS! ANotHer RoUNd?