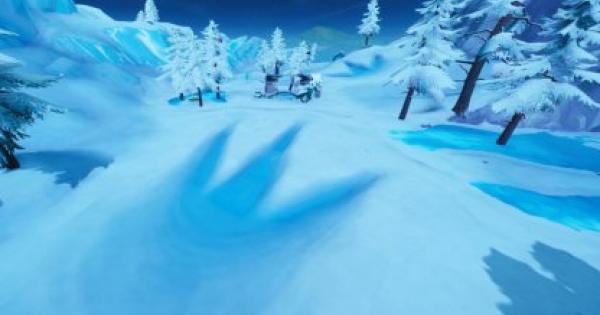 A monster in Fortnite? Find out everything to know about the Polar Peak destruction, the footprints & the eye, event theories including Godzilla, & more here!

Everything started when grumblings and small tremors started to happen every few minutes in Polar Peaks. Faint growling could also be head when you visit the mountaintop palace.

A part of the ice supporting Polar Peaks broke revealing a giant eye behind the ice! The eye moves and follows players when they get too close to it.

With the release of v9.20 update, the ice underneath Polar Peaks and its castle have been destroyed as whatever's under it has escaped.

Giant Footprints Leading to the Ocean

Giant footprints in the snow also appeared with the v9.20 update. Several three-toed footprints lined up from the frozen lake towards the cliffend where it briefly stops with no sign of the creature who made them.

Theory: Monster is Connected to Fortbytes

Half of the Fortbyte image has been revealed, giving us a brief clue as to what Bunker Jonesy is drawing. There's reason to believe it has something to do with the monster.

Check Out the All Fortbyte Locations & Guides Here

It's probably not a coincidence that there is also a giant eye in the Fortbyte image. Could this have predicted the appearance of the monster?

A black monster with three-fingered hands was also shown in the Fortbyte image. It's possible that it's the same creature that has escaped the ice!

Everything that has been happening in the island could be a teaser to a possible collaboration between Fortnite and the great monster himself, Godzilla!

Collaboration in Time for Godzilla: King of the Monsters Movies

With the release of Godzilla: King of the Monsters, this would be a perfect time to have a collaboration featuring Godzilla.