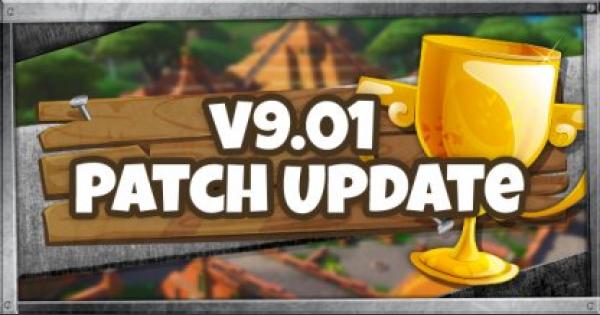 Learn everything new in Fortnite's v9.01 Patch Update, including the release of the Tactical Assault Rifle, and more!

The first update of Season 9 brings a new weapon to the island and various fixes for the game. Get ready for a shootout with the newly added Tactical Assault Rifle.

Get up close and personal when the v.9.01 update releases tomorrow, May 15.

Get Close with the Tactical Assault Rifle

The Tactical Assault Rifle is capable of ripping through enemy health and shields thanks to its high fire rate and extended magazine. Just remember to stay close to your target to get the best of it.

The Drum Guns have received a significant change to its damage. From 26/27, the gun's damage has been lowered to 22/23.

To lessen the number of high fire rate weapons, Fortnite has vaulted the Compact SMG. All varieties of the weapon has been removed across all game modes except Creative and Playground.

From 200, the health of Ballers has been reduced to 150. The change was made to lessen the defensive capabilities of the vehicle.

Check Out the Baller Here

Check Out the Season 9 Map Changes

Players will now be able to build through the Slipstreams to make it easier for players to get into Slipstreams. Buildings will immediately be destroyed when players collide with it while riding it.

Slipstreams will automatically be disabled once a match gets to Storm Phase 5. According to the patch notes, this is due to issues Slipstreams posed previously during late game.

Fortnite has announced that it will release a fix as well as compensation for the bug that removed the Hybrid and Blackheart style challenges for players. This is included with the release of 9.01.

Skins Affected by the Bug

Update: We have a full fix for affected players in the v9.01 update that will provide compensation for any previously completed Challenges as well as a bonus!