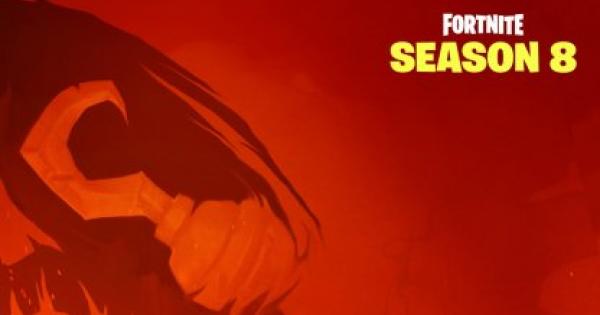 According to the latest in-game notification in Fortnite, downtime before Season 8 will begin on Feb 28 at 4am ET. After the downtime, Season 8 will start.

Check Out The Fortnite Season 8 Trailer Below

Buying a Battle Pass for Season 8 and ranking up your Battle Pass tiers will give you access to many exciting challenges and rewards!

Another brand new Fortnite Season 8 Battle Pass exclusive skin, Hybrid will automatically be in your inventory once you've purchased the Battle Pass.

Sidewinder is the exclusive Season 8 skin that will be unlocked when you purchase the Battle Pass bundle.

New Pets To Carry Around

New pets can be unlocked in Season 8 including a pretty fox and a cartoon-ish dog.

Exciting new wraps that will customize the weapons you're carrying will also be available in Season 8!

Fortnite Season 8 will pave way to three new named locations in the map - the Volcano, Sunny Steps, and Lazy Lagoon.

Lava flowing around the map from the Volcano will deal 1 damage to each player when they touch it. Lava can also bounce players off their surfaces, so be careful!

Fly To The Sky With Volcanic Vents

Volcanic Vents will boost players off the ground and into the air! This includes vehicles, too! This is a great way to move to another spot in the map or spot enemies in your area.

The new Pirate Cannon has the ability to damage enemy structures by its launched cannonballs! Players can also climb onto it and launch themselves for an epic surprise attack!

The X-4 Stormwing plane has been vaulted for Fortnite Season 8! Players won't be able to find it in the map once the update hits.

Other vehicles such as the ATK and Shopping Cart will also be vaulted in Season 8. Players can use the Volcanic Vents or the Quadcrasher to make their way around the map instead.

Get Help In Challenges With Party Assist

Players who are having a hard time completing challenges can now get the help of their friends with the new Party Assist feature! They can choose a challenge they want to complete and whenever their teammates do so, it'll count towards their achievements!

Work as a team of 50 against another team of 50 players in an all out Battle Royale. 50V50 is making a comeback this Season 8!

Jetpacks and shotguns are your best friends in the LTM Close Encounters. You have to get up close and personal to take down your opponents in this returning Limited Time Mode.