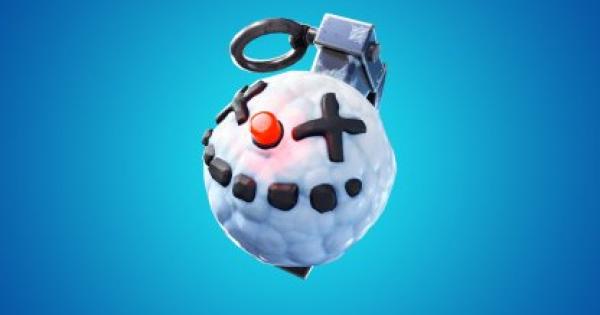 The Chiller Grenade is unique in a way as it not only affects players, but vehicles as well. Any player caught in its blast will be thrown off and receive icy feet, while vehicles will only receive icy feet.

The Icy Feet is best used in close to mid-range just like others throwable. Hitting targets with these weapons becomes relatively harder the farther you are from the said target.

The Chiller Grenade does no damage to enemies even with a direct hit. At face value, it's not an offensive weapon.

Similar to the Impulse Grenade, the Chiller Grenade launches users and enemies alike away from the blast zone. It then immediately applies Icy Feet to them, letting them slide and travel farther.

Shopping Carts, Quadcrushers, and ATKs are all vulnerable to the Grenade Chiller. If they're caught in the blast, they won't be thrown off, but they will have ice blocks on their wheels.

The Ice Blocks will only disappear after 7 seconds after application. Other than waiting, there's no way to remove the blocks.

Use to Escape from Enemies

With the Grenade Chiller, you can easily put quite a distance between you and any enemy. Throw a grenade at your feet or at your enemy's to throw you both away! This is especially great for escaping close combats.

It's also a good way of closing the gap between you or an enemy, or if you're trying to chase after the edge of the storm.

Good for Throwing Enemies Off Cliffs

Get offensive with the Chiller Grenade by using it to throw enemies from high places! It's especially powerful at mountain tops and building rooftops as it will send the enemies flying!