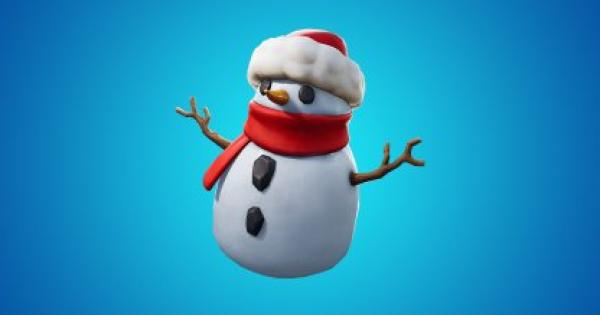 Learn all there is to know about the new item - Sneaky Snowman in this guide! This includes an overview of the item, its traits, where to find it, & tips on using it.

The Sneaky Snowman has been vaulted as of v8.00 Patch Update. We'll update this if it ever comes back to the game.

The Sneaky Snowman will allow players to camouflage by putting on a disguise and creating identical snowmen as distraction! It's the second camouflage item introduced in Fortnite.

Blend In to the Winter Island

The Sneaky Snowman functions in the same way as the Legendary Bush! It provides players with a camouflage that can be used to blend in to the environment with the added bonus of being able to create additional snowmen.

Use Primary Fire to Create Snowmen

The Snowman is thrown as a projectile and will create a Snowman where it lands! You can place it anywhere as long as it's not in between structures or objects.

Use Secondary Fire to Wear Snowman

Keep your hold on the secondary fire to put on this adorable Snowman. Putting on the disguise takes a few seconds so make sure to do it in cover!

Snowman Acts as a Shield with 100 Health

Putting on the Snowman will act as a shield, protecting you from any enemy fire damage. It has a health of 100, a full shield and will be destroyed once the health has been depleted.

Cannot Build or Fire when in Disguise

Wearing the disguise will render you unable to build structures or fire weapons! Once you switch to another weapon or building option, the Snowman will be destroyed.

You can run, jump, and crouch when wearing the Snowman! It's only when you switch items that it gets destroyed.

Tips on Using the Sneaky Snowman

Before putting on the disguise, it's best to place a few Snowmen around you first to act as decoys for any enemies. You can put on the disguise once you've had one or two Snowmen placed.

With suppressed weapons, you can shoot at enemies without as much risk of exposing your position to them! Shoot enemies then put on the disguise once they've been alerted.