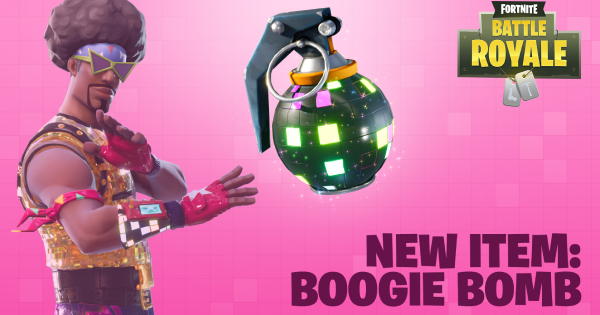 Boogie Bombs are best used in Duos and Squads assuming that your teammates don't get caught in the blast. It's generally used as a fun item rather than an offensive one.

The effective range of the Boogie Bomb is close range as the players need to be in the immediate vicinity of the "explosion" to be affected.

Building and item use disabled

Players under the effect of the Boogie Bomb will be unable to build or use items while they're dancing. Attacking will also be disabled.

Boogie Bombs will give users 5 seconds to eliminate affected players but bear in mind that although they are unable to equip items and weapons, they can still move and dance away.

Have a weapon with burst shots ready

SMGs are recommended with their rapid fire rate to take down enemies affected by the Boogie Bomb.

Make sure teammates are far from deployment site

When playing in Duos and Squads, make sure that your teammates aren't caught in the blast so they can take out affected enemy players in case you get caught in the effect as well.

Throw it in a reasonably confined space

This will hinder affected players' escape and provide you with an advantage in eliminating them.

Use as a distraction

Deploy the Boogie Bomb before charging into enemy territory to give your team the distraction advantage.