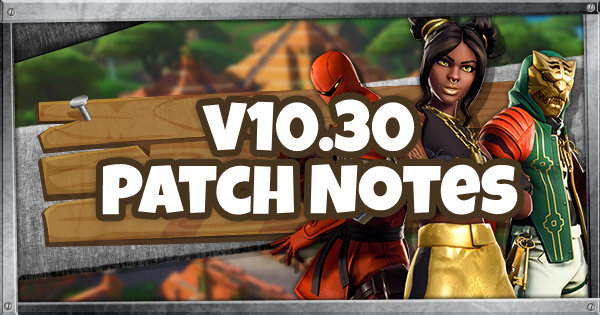 Find out everything to know about the 10.30 Patch Notes of patch update and content update here! This includes v10.30 details of new weapons, items, changes, and more!!

A pretty minor update, the v10.31 Patch Update brings a new feature for parties and a few minor adjustments. Overall, it's mostly bug fixes and changes.

The Party Hub is a new feature where players on the same party can chat, party up, and play together. This feature however is only available for mobile.

The 10.30 release date is has been confirmed. There is a downtime.

Greasy Grove Is Back With A Taco Shop

Icy location is now replaced by Greasy Grove! Great to see them back!

you the power to vote for what comes back to a new Item Shop slot: Community Choice! When this feature is available, Item Shop content will battle against one another, and you can place your vote on what returns for an encore.

How Does It Work?

For each Community Choice event, you can vote once a day in support of the item you want to see return. While your daily vote is locked once you confirm a choice, you can vote for other items on any following days for the duration of the event

Spicy Tacos is a new foraged item! It expires if you don't eat! Make sure to consume when you find them. We found them in Greasy Grove!

Paradise palms turns to moisty palms the ice and greasy is gonna melt. And the 2 beacons and grasy and paradise are connected and will flood paradise when the ice melts