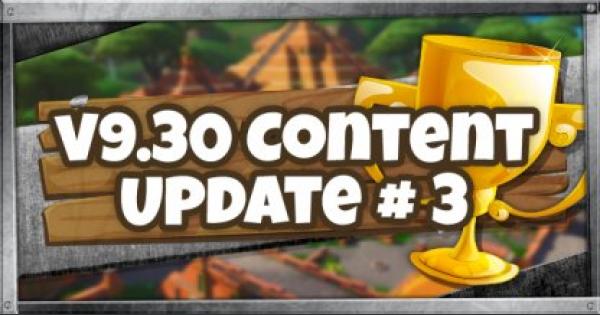 Find out everything to know about Fornite's v9.30 Content Update # 3, including Patch Notes, release date, official tweet, and more! This includes the release of the Air Strike!!

v9.30 Content Update is the last of the content updates for v9.30 and it ends on an explosive note! With the Air Strike now in the game, better get ready to survive against missile barrages.

Get ready for an explosive time when the v9.30 Content Update #3 lands tomorrow, July 9 at 8 AM ET!

There will be no downtime.

The v9.30 Content Update # 3 comes as part of a series of content updates released over the couple of weeks. Similar to the previous content update, it includes a new weapon.

Bring down fire and destruction by calling an Air Strike to your enemies! Where the smoke leads, the missiles will follow.

Releases a Cloud of Smoke that Signals Missiles

Once thrown, the Air Strike will release a cloud of red smoke that will signal and spawn in a barrage of missiles. 20 missiles will drop in a 9 meter radius where the canister stops.

With 75 damage to players and 200 damage to structures per missile, the Air Strike is a force to be reckon with. Even when you don't get directly hit, you're not safe because the missiles also explodes upon impact.

For the next week, players can expect the following LTMs to be available for play. These are in no particular idol.

LTMs Included in the Rotation