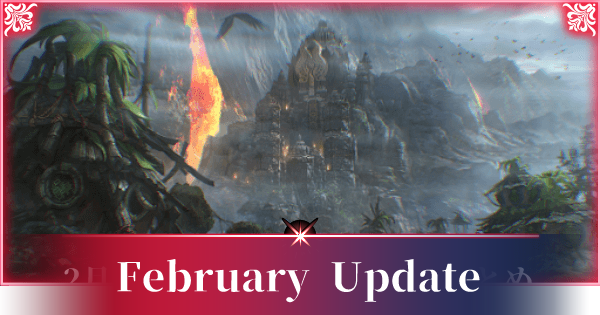 Information on A3: STILL ALIVE's February update has officially been revealed! This update is chock-full of new content, so make sure to read up on exactly what's coming below.

In addition to a brand new area and the addition of 20 new levels, the February Update will bring with it new equipment sets, a new accessory system, and a plethora of convenient gameplay changes.

Check Out The Official Site Here

The new area Somius is set to be added in the next update! This volcanic region will of course include more main story quests to do!

The Corrupted Aselkan Ruins will be the new equipment dungeon for Somius. Here you'll be able to get high level equipment by defeating enemies!

Once the update hits, we'll be seeing increases to Character, Apostle, Skill, and Guild level caps!

New set equipments and set effects will be added to the game! You'll be able to check all available sets via the in-game codex as well once the update goes live!

A new system will be added to add Sets to Legendary Accessories! This will power up the accessory and make it a "set" item, providing other useful bonuses.

Adrasil's Wish is a new summon which will give you a high probability of obtaining Soul Linkers you want! You can also get Soul Stars that can be used to level up your Soul Linkers quickly and efficiently!

A new Raid mode called Twilight Cemetery will be added with this patch. You'll be able to take on an even harder boss and get equipment & accesories for levels 120-140!

Thanks to the responses of players during the「Surprise Survey Event」, tradeable items will now be added to A3! Players' feedback has been heard and responded to! Additionally, other general quality of life improvements will be added in this patch, including guild features and auto-enhancement!

Offline Auto Battle Mode will allow players to continue fighting monsters even while they're logged off! This means that you'll be able to get rewards and battle monsters when not playing the game! You'll also be able to choose your battle strategy, although we don't have many details on that as of yet.

Severs in each region will be merged together in the upcoming patch. Check below to see which servers will be merged. If you have characters of the same class on two of these servers, make sure to read the information below to find out what happens to them.

Servers To Be Merged

Same-Class Characters During The Merge

Data Not Saved Upon Merge

This February update is the 4th major content update the game has seen. Check out the articles below to see what was added in previous patches!