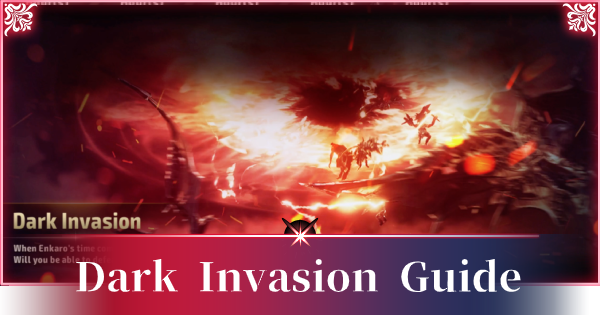 Check out our Dark Invasion Guide for A3: STILL ALIVE. Find out how to unlock & clear the adventure, how to beat Tousbahal, Dark Invasion event times, rules, and more!

In order to unlock the Dark Invasion mode, you'll have to first reach player level 20! This is an important milestone, as you'll also unlock Guilds at this point as well. Simply progressing through your main story quest will be enough to get you to this level!

Dark Invasions are massive multiplayer PvE experiences. They only have one standard level of difficulty where you'll cooperate with a huge amount of other players to complete a certain objective.

More Exp As A Party

The Dark Invasion content incentivizes you to group up before entering it by providing you with bonus exp if you're in a group! Party up with members of your guild before entering to maximize your potential!

Find A Guild Via Our Recruitment Forum Here!

Bring Your Own Stats

Dark Invasions are a mode where you can use your character as it is, including equipment and Soul Linkers. It is not like the Battle Royale mode, where you have an equal playing field with all other players.

Only Occur At Fixed Times Of The Day

Dark Invasions are time-gated content. They can only be entered and completed when the event is active. It's also possible to reserve a spot for Dark Invasions, and we recommend doing so, as they might fill up.

Hold Off Foes Until Bar Charges

When the Invasion starts, your first mission will be to successfully defend against waves of enemies while the bar at the top of your screen charges.

Your main job while the progress bar in the top is filling up will be to defeat as many enemies as you possibly can. The more enemies you get, the higher your guardian level will become. This guardian level will influence the rewards you get at the end of the stage as well!

Revive If You Die

If you happen to die during the event, don't worry. You'll be presented with two possible ways of reviving. The first will be free, and will send you to a fixed point somewhat away from the battle. The second option will cost you 50 diamonds, but will rez you right where you fell. Blue (Free to play) Diamonds will be consumed first. If you run out of those, then White (Paid) Diamonds will be consumed, so be careful!

In the second part of the event, two black crystals will spawn on the field. At this point, you will go on the offensive and try to take them out in time! Once you destroy both of them, the final boss will spawn.

Tousbahal has several dangerous attacks you'll be able to see coming via a red indicator on the ground. These can do massive damage, so it's important to always be ready to dodge away, especially if you're a melee player (though their range is rather long, so Wizards and Archers should watch their positioning too).

Adjust Your Skills Before Entering

Once the battle starts, you won't be able to adjust your skills, so make sure to do so prior to entering the Invasion! You'll want to bring a lot of AoE skills for this mode, as enemies are often clumped up.

Work Together With Others

If the Holy Artifact in the center takes damage from enemies, it will take longer to charge. There's also only so much you can do alone to prevent this, so we strongly recommend moving together and cooperating with other players.

Use Warp During The Defend Phase

You'll be able to see a list of the Artifacts you need to defend on the left side of your screen. You can also warp to them, which is highly recommended as it is much more efficient!

Dark Invasions will give you better rewards depending on your clear time. This means that above all else, dealing high amounts of damage quickly should be your priority. Make sure to bring gear that boosts your physical (or magic) ATK stat.

Rewards Improve Based On Clear Time

Your rewards from Dark Invasion will depend on two factors: your individual rank and your regional rank. The former is dependent on how many monsters you individually killed, while the latter depends on how fast your group cleared the event.

Get A Buff For Ranking High

By going to a Monument in Aldern, you'll be able to receive a damage buff of 5%! You'll have to interact with the monument directly, and this buff can only be obtained once per day. Note that the top 10 ranking players will also get their name listed on this monument as well!