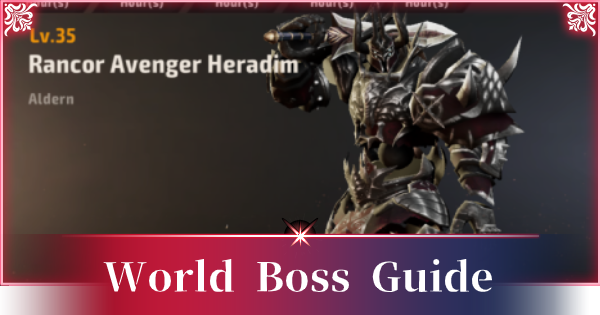 Check out this World Boss Guide for A3: STILL ALIVE. Learn how to fight each world boss, Heradim, Dewolf, Neovald, and Parkus, when they spawn, rewards, location & how to unlock!

World Bosses - How To Fight & Locations

Progress Through The Main Story

World Bosses spawn on certain maps in the world. If you're not far enough in the story, you simply won't be able to get to these maps to fight the bosses, so your first step will be to progress the story! In addition to that, there will also be a minimum level for these bosses.

※ The above times are in EST and for the North American Server.

All bosses spawn simultaneously when the clock hits spawn time If you want to get all 4 bosses in the 30 minute time limit, make sure to warp!

Exactly one World Boss will spawn in a designated map per channel. Once you defeat a boss in one area, it's also possible to change channels via the icon in the top right and fight the boss again! You'll get rewards if you defeat a boss within the given time limit!

After World Bosses spawn, you will have a total of 30 minutes to take them all out. A world boss will only spawn once per channel and will not respawn until the next timing! Note that the bosses will likely die in the first few minutes!

Heradim moves around using a forward charge attack, so if you're using Auto-Battle for this, make sure to dodge it! When he reaches a certain health threshold his appearance will change and his AoE circle attack will grow larger! Being hit with this attack will fear you for several seconds, so be ready to avoid it.

If you participate in a battle against a World Boss, you will get guaranteed rewards, such as Cards. However, depending on your overall contribution to the fight, you will also get additional rewards! The higher your contribution rank, the better the rewards get. This is mostly determined by damage, so make sure you gear up your character to the max!