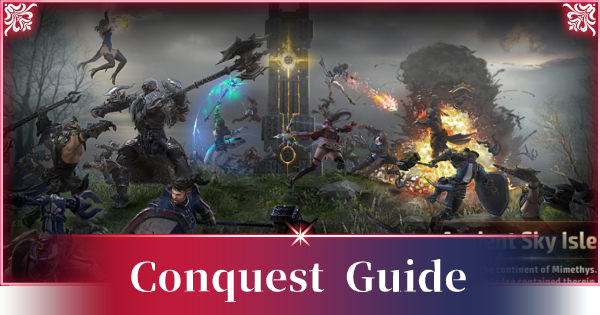 Check out this Conquest Guide for A3: STILL ALIVE. Find out about the conquest map, conquest rules, tips, strategies, rewards, how to capture, and more!

Conquest is a Guild VS Guild PvP mode. It is held only once a week, at 9pm on Saturday and lasts about 15 minutes. You'll have to occupy certain areas on the map, defending them against players of enemies guilds while competing for points.

The above is the map for the Conquest mode - you can see that large towers occupy the center, making them more easily contested.

In order to participate in the Conquest mode, your guild master must choose a region to assault. It's possible to register to join this mode one hour before it starts.

Once Conquest begins, you'll be able to join the map your Guild Master chose. After joining, players who have Guild authority will be able to designate places as objects and issue orders.

There are various towers across that map that can be Branded to gain Conquest Points. There are 3 main sizes to each of these towers and you can expect that they'll award you more points they bigger they are! Also, after 30 seconds, you'll gain points for continuously holding that location as well.

In order to Brand a tower, you'll have to go up to and wait for the button's action to finish. If you are hit with a status condition such as fear, stun, or taunt, the cast will be interrupted!

While you're battling, you can easily differentiate enemies from allies by looking at the color of each player. Allies will be blue, while enemies will be red (or another color, depending on their team's points) Since differently ranked guilds will have different colors, it'll be important to go for players who are high ranked.

Get Rewards For Ranking High

Once Conquest ends, you will receive guild rewards based upon your overall performance during the match.

Only Top 3 Guilds Get Rewards

Note that only the top 3 guilds will get ranking rewards. Depending on what guilds are currently set to enter the Conquest, it might be a good idea to switch over to another map if your competition looks too fierce.

When a match ends you'll be able to check out your detailed contribution on the results screen. This will show you exactly how much you contributed to your guild's success.

A maximum of 20 players from one guild can take part in Conquest! If you have any less than 20 people, you'll be at a significant disadvantage. Your first battle will be with the attendance boss: make sure to remind players to join you on Saturday nights at 9pm!

Status effects (stuns, fears, taunts, etc) can be used to stop players from capturing towers. This makes them absolutely indispensable for Conquest mode, so we recommend slotting in at least one of those on your bar before joining this mode.

Strategy is extremely important in Conquest mode. You'll want to clearly lay out who is going to do what before starting.

Branders are players who will go up to towers and try to "brand" (capture) them for points. Templars work well for this due to their ability Wings of Redemption, which applies debuff immunity, allowing you to cap uncontested!

These should be your highest DPS players with the most burst damage, like Wizards and Assassins. Your primary goal will be to take out players, especially those preoccupied with interrupting or branding a tower.

Interrupters will be players whose primary goal is to prevent enemy guilds from capturing (branding) towers. Berserkers do a good job at this due to their CC abilities, such as Crazed Howl and Crazed Pull, both of which are AoE! Just be careful not to lower your defenses and get taken out.

For a defender, we recommend the Archer, largely due to their excellent placed skills. These can be used to fortify a given location. Templars also work well for this role.

Holding points are an extremely important part of the Conquest mode. Every 30 seconds you'll get additional points added to your score, meaning getting towers fast and preventing enemy guilds from getting them is absolutely crucial.

Capture Pillars Right Before The End

In order to actually get rewards from this mode, your guild will need to rank in the top 3 for the match!