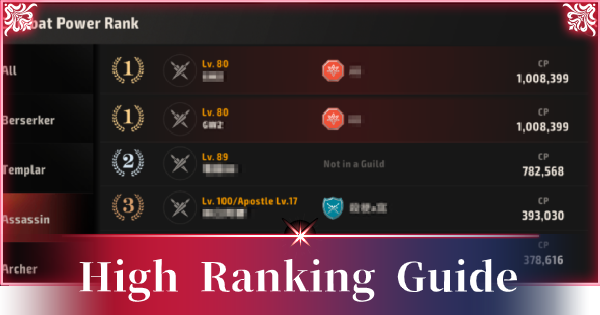 A3: STILL ALIVE
How To Get A High Ranking Guide

Advantages Of Getting A High Rank

Benefits To Getting A High Rank

In certain content, including World Bosses, you will get a rank depending on how much damage you deal in that event! This rank will decide the rewards you get, and having fewer top-tier players to compete with means your chances of getting a high rank are much greater! Remember, Achievements and Titles also grant you bonus stats too!

In some Guild PvP content, player power is very important. In some events, only the winning guild will get rewards, so being in a guild with powerful players will be a huge advantage!

Find A Guild Via Our Recruitment Forum Here!

Get Noticed By Others

The higher your rank gets, the more people will see your name. The chance they'll send you a message or friend request also increases dramatically. Getting a high ranking is a good way to gain recognition on your server.

In order to get a high rank, you will have to spend a significant amount of time and perhaps money to be able to level up quickly right when a server opens. You'll be competing with other players, so inadequate preparation may lead to you failing!

On a server with fewer high level players, it will likely be difficult to find groups for high level content! Content like the Raid and Rift Altar are made significantly more efficient by having a group, so you may have trouble doing them alone.

How To Get A High Ranking

How To Get A High Rank

Players will be ranked on several different categories, including Combat Power, Level, Battle Royale, Dark Invasion, and Guild. There are merits to pursuing all of these options, but in general we recommend trying to go for the Combat Power ranking first!

Leveling up via quests will naturally give you access to gear with higher CP and is the fastest way to rank up! Above all else, prioritize progressing through your story and doing lost of quests!

In A3, it's possible to open your inventory to do various tasks while auto-battling! This means that you'll want to make the most efficient use of your time by doing things like clearing out your inventory while you're killing enemies!

Your equipment will change at 10 level intervals. However, Accessories don't have a level requirement, and as such are hugely influential to your damage, especially early on. Prioritize getting them! The same can be said for weapons!

You will want to prioritize content that provides you with gear or Soul Linker dropping Soulstars. Some of this is time limited, so you'll want to make sure you don't miss a single one if you want to keep up with other players and rank highly!

Power Up Your Soul Linkers

Soul Linkers will also contribute to your overall Combat Power, and can be a huge source of the damage you deal. You'll have a chance of obtaining them from Soulstars you get from various content. Since this is random, you won't want to spend too much time on it, but it's worth doing content that drops Soulstars incidentally just for the off chance you get a high rarity Soul Linker! Don't forget to upgrade and equip gear on your Soul Linker to power them up even further.

Other Ways To Raise CP

There are a variety of other in-game features which influence your Combat Power, including but not limited to Achievements, Titles, the Monster Codex, and Capes! These will provide small, but eventually significant increases to your power. We don't recommend prioritizing them, but it is worth keeping them in mind and not forgetting about them while you play!

Collect Monster Cards While You Sleep!

Monster Cards can be obtained by killing monsters, and they directly influence your stats. However, since it can take a long time, it's not always the most efficient. If you leave yourself out in the world on automode while you sleep, however, you can get this done in your downtime! Ancient Monster cards in particular require many cards to unlock, so it's best to start early.

Check Out The Monster Codex Here

Boost Exp With Feathers Of Protection

Using a Feather of Protection will let you boost up your Radienne's Protection gauge, giving you a 100% EXP Acquisition bonus! This will be key in ensuring that you level up quickly during the opening parts of the game.

The Origin of Beginning starter pack will give you a powerful Ancient rarity helmet, armor, and gloves. This will dramatically increase your power early on and is quite recommended when racing for the top.

The Strong Start Package will come with a huge amount of passive and active skill enhancement stones, allowing to quickly power up your skills. The stronger your skills, the less time you'll spend fighting enemies, so this is a huge buff.

Time spent moving to your destination is time spent not leveling. Movement can be a huge impediment to your leveling progress. A good way to circumvent this is to use Scrolls of Teleportation to move around whenever possible! Get as many of these as you can.

Get EXP With Daily Entry Tickets

Content with a limit on daily entries is often a more efficient source of EXP than just regular leveling! This means that the more you can access this content, the better. Buy Daily Entry Tickets to do dungeons more often!

The only way to obtain Accessories early on in the game will be via the paid currency, Diamonds. We recommend getting at least one of each accessory to immensely boost your power early on. Additionally, if you can procure a 5★ Soul Linker early on, you'll be in even better shape.

Ranking On A New Server

A3, unlike other traditional MMORPGs, is a game that will regularly be opening up new servers! The main reason for this is to give players who may have missed launch the opportunity to move at the same pace as others and reach high rankings! If you started A3 after launch, it might be a good idea to make a character on one of these new servers.

Rewards For Leveling Up First

Remember, A3 has limited-amount first-come-first-served rewards for leveling up! The first people to hit major leveling milestones (levels 20, 30, 40, etc!) will receive special bonuses. On new servers, these are all reset, giving you a chance to get them!

※ Items in red are rewards with limited amounts!

The above 3 special rewards will be given to players who meet the requisite conditions listed!

With the launch of new servers to encourage people to try to engage in rank-up races, A3 is including new events that will help you power up faster. Some of these will include bonus rewards which will let you power up your character faster!

Should You Play On Older Servers?