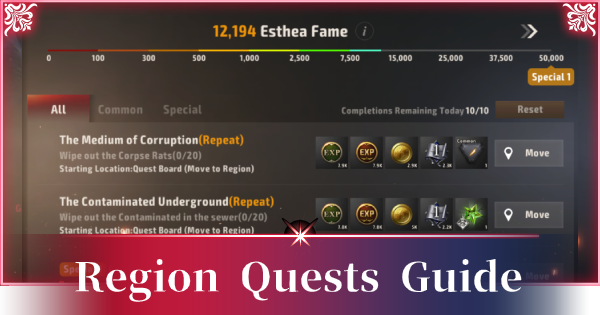 Check out this guide on Region Quests in A3: STILL ALIVE. Find out region quest mechanics, a list of all region quests, rewards, fame requirement, auto-clear, and more!

What Are Region Quests?

Unlocked After Clearing "The Light Of Esthea"

Region Quests can be unlocked by clearing chapter 1-61, the Progress Quest 'Light of Esthea'. You'll have to progress somewhat through the main story before you can get access to these!

Region Quests have a limit on how many you can complete in a given day - the limit is 10 per day! The further along in the campaign you go, the more varieties of quests you'll get.

Some Are Repeatable Quests

Some region quests can be completed only once, while others are repeatable. This means you can do them and get their rewards as many times as you want. In general, one-time quests tend to have better rewards.

Many Quests Give Fame As A Reward

Region quests are a good way to help get your Fame up. If there's a region quest you want to unlock, it's a good idea to do other quests and farm Fame!

Some Quests Have Fame Requirements

A certain portion of region quests also require a specific Fame level in order to be accepted. You can increase your fame by killing monsters in the appropriate area!

Repeatable Quests Can Be Skipped

By getting Level 4 or higher of A3 Members, you'll be able to unlock the Auto-Clear Repeat Quest function! This means that you'll be able to get tickets which let you instantly complete repeatable region quests!

※ Tap each area to jump to a list of quests below