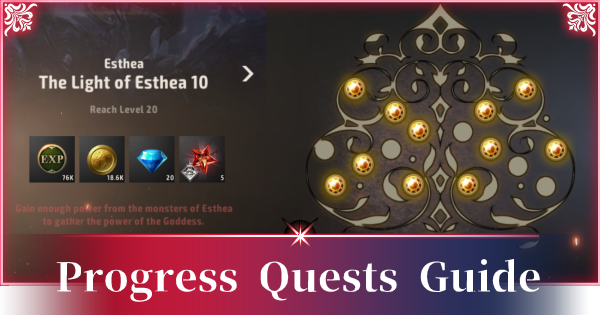 What Are Progress Quests?

Progress Quests are special quests which will come up during your main story campaign. They often appear toward the end of the particular chapter and must be cleared in order to progress to the next area.

Defeating Enemies Is Often A Requirement

One very common requirement of many progress quests is to defeat a large amount of enemies, or perhaps defeat a boss-level enemy. If your character isn't sufficiently powerful this can be a bit of a road block for you, so always make sure you're powering up your character.

Progress Quests are actually a collection of 10 or so smaller quests. By completing one quest, you'll unlock the next one. Once you complete every single quest in the tree, you'll progress onto the next main quest.

Quests which require fame (reputation) will often pop up earlier. If you still don't have enough reputation, you should think about doing Region Quests to bump it up a bit.

The latter half of progress quests may sometimes have a specific character level requirement for completion. It's worth it to take a look at the Progress Quest trees and see if there's a level requirement coming up!

※ Tap each area to jump to a list of quests below