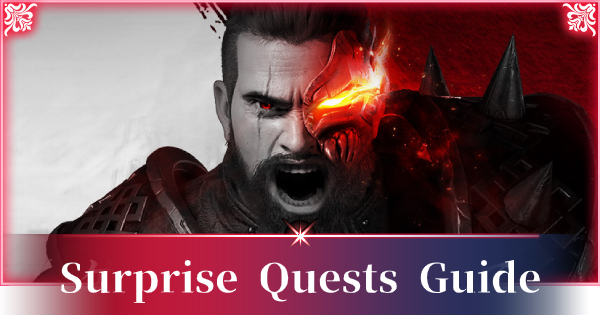 Check out this guide on Surprise Quests in A3: STILL ALIVE. Find out how to get surprise quests, surprise quest mechanics, rewards, efficiency, and more!

What Are Surprise Quests?

Surprise Quests are, like the name suggests, quests that can spontaneously trigger while you're doing other quests in each zone. These quests won't always spawn, so it's important to do them whenever they happen to pop up.

When you complete a main story quest, sometimes you'll get a surprise quest of a very similar nature. The content may be very similar, so it's always worth doing these for the extra experience.

Good Rewards For The Difficulty

Surprise quests have fairly good rewards relative to their difficulty! In particular you can get a lot of experience points and gold from them, so we strongly recommend doing every single one that comes your way.

Optional To Pick Up

Surprise Quests are entirely optional - you can choose whether or not you pick one up. The quest will only begin once you've accepted it, so if you'd rather focus on your main quest at the time you can do so.

Can Hold On To Them For Later

So long as you haven't cancelled a Surprise Quest, it's possible to put it on hold! Putting it on hold will lower its visibility somewhat, making it easy to forget the quest exists, so be careful. Quests you've put on hold can be completed later, so there's almost no reason to cancel a surprise quest!

The basics rewards you should expect to get from Surprise Quests are Gold and Experience. If you can get these quests done quickly, they are extremely efficient, so we strongly recommend you knock them out as you get them!

Additional Rewards Depend On Level & Map