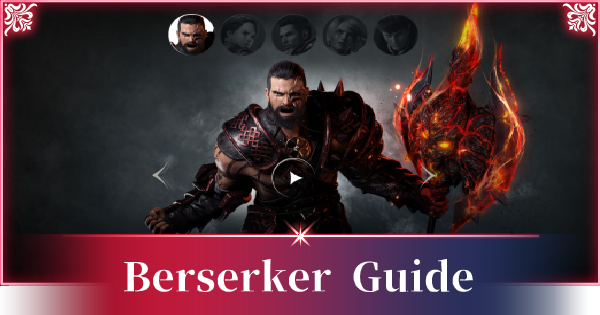 The Berserker is a fierce melee attacker with plenty of multistage skills and relatively short cooldowns. It has a somewhat shorter reach, meaning you'll have to get close to enemies first to deal damage. Once you do, however, you'll be quite dangerous.

Close The Distance Strategically In PvP

The Berserker is a class that needs to think carefully about when to close the gap. Luckily, abilities such as Savage Massacre and Breakthrough, which make you unstoppable and charge at enemies, can do just that. It's also possible to yank in opponents with Crazed Pull!

The Berserker class doesn't have any abilities which let it turn invulnerable, though it does have some abilities which reduce both your and your opponent's defenses. These situations are indeed high risk, but if you're successful, you'll deal huge damage and possibly kill your enemy!

The skill Crazed Howl fears all enemies in a given area, making them unable to do anything for a period of time. This is a great way to give yourself a breather or buy time for you and your team!

The combination of Hidden Anger and Curse of Immortality will let you cover your own weaknesses quite well! Having Mince is also excellent, as it deals great damage and has quite a short cooldown. In general for farming monsters, we recommend abilities that don't knock enemies back/away from you!

Curse of Immortality and Crazed Howl are both essential to have when doing PvP, so make sure to bring them along! The Berserker is surprisingly good at supporting his team as well, so make sure to check your composition to determine if you should focus on DPSing or supporting your team!

The Berserker has several abilities which lower both it and its enemy's defenses, so it might be worthwhile to just go all out and bring an ATK Type Soul Linker to maximize damage output.

We feel that in general it's best to prioritize buffing stats that improve your overall damage output. Attack and critical damage up are the two stats you should be prioritizing when leveling up passives!

G'day, sorry did I ask that last question in the wrong spot? Cheers

G'day, the order the skills are posted for PvP and PvE is the order you would equip them? Thanks