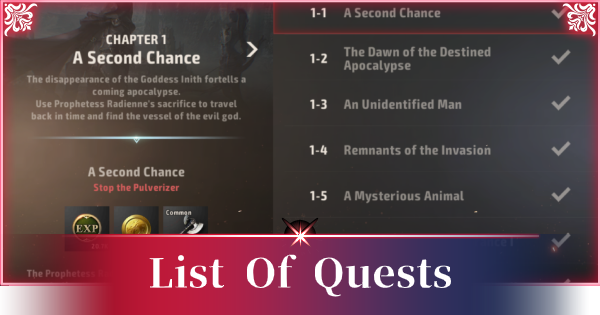 Check out this list of quests for A3: STILL ALIVE. Find out all types of quests, how they spawn, trigger conditions, rewards, daily limits, and more!

Quests are the bread-and-butter of any MMO, and A3 is no different: by completing the requirements set out by the quest, you'll get Exp, Gold, and items! Different quests have different trigger conditions, and will of course provide you with different rewards.

※ Click or tap to jump to more info below.

Quests That Progress The Story

Main Quests are the primary way of progressing the story in A3: STILL ALIVE. They will unlock major in-game features and provide you with heaps of experience to boot, so they should be your highest priority!

Main Quests will unlock new content for you, at which point you'll often get a tutorial. Make sure you don't skip these tutorials and read them carefully, as they'll be helpful for you down the road.

Cutscenes Only Viewable Once

Another important thing about main quests is that you'll occasionally see in-game cinematics! You can only see these once, so we recommend not skipping them! If you've skipped it, you can always create a new character and try again.

You will occasionally come across quests where you have to escort an NPC to a certain location. You may also have to ensure that this NPC doesn't get killed by enemies, so don't stray too far away from them!

Spawn As Part Of Main Quests

Progress Quests often trigger right around when you've nearly cleared a given map area. Progress quests act as a final hurdle before you can move on to the next major area.

Progress Quests for each area will almost always feature a quest where you have to kill a large amount of enemies to progress. If your Combat Power is low, this might be challenging or take a long time, so make sure to always raise it up.

Unlocked After Clearing "The Light Of Esthea 1"

Region Quests can be unlocked by clearing Chapter 1-61 of the main story, The Light of Esthea. Make sure you've progressed to this point to get access to this important feature!

Check Out The Region Quests Guide

Quests With Limited Number Of Clears

You'll get access to different types of region quests as you progress the main story. Most important, however, is the fact that you can only clear a total of 10 region quests per day.

Although many region quests are one-time-only, there are some which can be repeated as many times as you'd like! Generally speaking, one-time quests will have slightly better rewards, though.

Needed For Some Main Quests

There are actually some main quests which will require you to clear region quests. If you've already done all 10 of your region quests for the day, you'll have to wait for them to reset the next day, so take note.

Surprise Quests spawn in certain regions of the map as you progress through them. Whether or not they spawn appears to be random, so you shouldn't expect to find these all the time. However, if you do come across one, definitely take care of it right away!

Sometimes, surprise quests will spawn immediately after completing specific main quests. In these cases, the content of the surprise quest will very often be similar to the quest you just did.

Surprise Quests provide very good rewards relative to their difficulty! They provide a rather high amount of exp and gold, so you'll really want to do these as soon as you see them pop up.

Spawn When You Meet Difficult Foes

Support quests appear to spawn when you come across particular powerful foes over the course of your gameplay.

Support quests, like the name implies, are there to help you out when you're struggling. As such, they will only spawn if, for example, your Combat Power is lower than it should be. If you keep your CP up you shouldn't encounter these quests. That being said, if you need their help, we strongly recommend doing them!